Love him or hate him (if you’re not French or a Juventus fan, you probably hate him), you can’t deny that wayyyyy back in the 1980s, there were very few better footballers in the world than Michel Platini.

In Europe between 1983 and 1985, there were no footballers better than Platini actually – as his Ballons d’Or attest.

Without further ado, here are the big corrupt legend’s best moments in football. Only two footballers in the history of mankind have won back to back to back Ballons d’Or. One is Michel Platini and the other is…?

I’ll give you three guesses…

‘Is it ummm…this is so much pressure…

I’m going to have to push you for an answer.

‘No forget I said that…Lionel Messi?’

Messi won four in a row actually, but still, winning three in a row is pretty damn impressive. So nice one Michel. Another quiz question for you:

No one’s going to judge you if you get it wrong.

No. Consider yourself judged.

It was actually Gunnar Nordahl of AC Milan fame. You idiot. He was a proper poacher, whereas Platini did it from midfield, which is quite extraordinary. 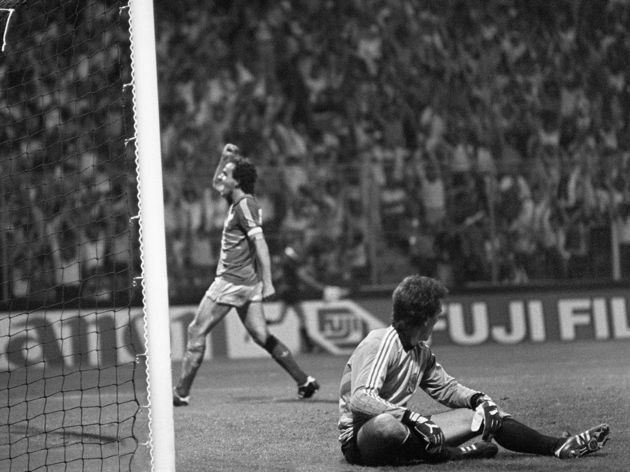 A perfect hat-trick is a rather rare thing in football. Peter Crouch only did it once – which tells you all you need to know.

So it is pretty exceptional that Platini scored two perfect hat-tricks in the space of four days during Euro 1984.

As I discussed in another article on Platini, the number 10 was pretty good at Euro 1984. He scored nine goals in five games at the tournament – including those back-to-back perfect hat tricks.

He proved to be the match winner in every game for Les Bleus in the tournament, scoring the opener in the final and the last minute of extra goal against Portugal in the semis.

Platini is, without a shadow of a doubt, the best player to ever play for Juventus. And that is saying something.

While at La Vecchia Signora, Platini was the star man as they won basically every single trophy ever made – like, I’m pretty sure they won Wimbledon.

During his five year stint in Turin, the France star also scored a lot of great goals for Juventus.

The pick of the bunch – for me anyways – was his goal against Ascoli in 1983.

No, it wasn’t an important goal, as Juve were already four up against the fourth worst team in Serie A, but it was a beautiful one. Platini played a quick one-two before backheeling the ball (yes, backheeling the ball) over a defender and then with his next touch, he dinked the ball over an onrushing goalkeeper  – on the half-volley – and into the net.