Goals? Drama? Serious virus scares? This week really had it all.

As always, it’s time for us to get ranking the top 15 performers across Europe, but we need a theme. This week, we’ve had a little bit of help from Master of None.

So, without further ado, let’s figure out where we’re going in life, find love and rank some players. “I found some candy in the couch. Love you, couch.”

The bagged a goal and an assist in ​Wolves’ 3-2 win over ​Tottenham, keeping his red-hot run of form going. “I feel like there should be an app that analyses your tum and tells you what you want to eat.”

Sarr can read everyone’s minds. He must be able to. He knew exactly what the world wanted him to do against ​Liverpool, and he did it.

Two goals and an assist to end the unbeaten run of perhaps the best team on the planet? Yes please. “Why do they call it Plan B? I mean, is Plan A having the kid? That’s a terrible plan.”

Can someone tell me what’s going on with Timo Werner? He was firing in goals for fun in 2019, but 2020 has not been his year.

He’s going to have to find his own Plan B, because Plan A just isn’t working anymore. Carlos Vinícius would have five stars on Yelp.

The Benfica man took his tally for the season to 20 goals this week, and don’t forget about his 12 assists either. “If there’s a movie on Rotten Tomatoes and it has a 70%, people say it has ‘mixed reviews’.”

Three questions have been asked about

“I was on a date that is now over because she got thrown out of the venue. I’m thrilled. She was a nightmare. She began the night with an aggressive Cartman impression and then ended it by being kicked out for stealing someone’s jacket.”

I bet ​Lukaku is thrilled that his time with ​Manchester United is over.

Another goal against Ludogorets has carried him to 23 goals in all competitions, and he is in perhaps the best form of his career. “We didn’t do anything for fun. You realise fun is a new thing, right? Fun is a luxury only your generation really has.”

​Serge Gnabry is having all the fun in the world right now.

He banged two goals against ​Chelsea and followed that up with another in ​Bayern Munich’s 6-0 win over Hoffenheim.

The world is his oyster right now. 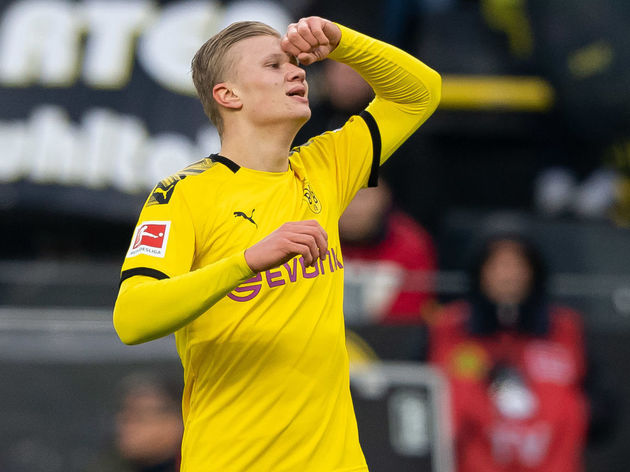 “Come on. There’s so many taco places. We got to make sure we go to the best one. I’ll do some research.”

“Great. I’ll sit here and do nothing.”

He sat on the bench for most of ​Borussia Dortmund’s 1-0 win over Freiburg and didn’t find the back of the net in his 27-minute cameo. Boo.

“I always play it safe, and I can’t do it anymore. The time in our life to do crazy s**t is winding down, and I don’t want to wake up one day and see that the window is already closed.”

Josip Iličić may be 32 years old, but he’s in the form of his life for Atalanta this season. He bagged one goal and three assists in a 7-2 win over Lecce, which is a standard day for him.

That’s the third time Atalanta have scored seven goals in a single game this season, and “So what takes you to Italy?”

“Pasta. I really like eating it, and I enjoy making it, so a few days ago I just decided to pack up all my stuff and move to Italy and go to pasta-making school.”

“Wow, how long you going for?”

Italy has been incredibly good to Ciro Immobile, who has hit 30 goals in just 33 games this year.

While he might not have netted this week, he did bag an assist against Bologna. Even when he’s not scoring, he’s still involved in the goal. It seems like ​Barcelona can only score when ​Messi is on form. That did not happen this week.

Quique Setién’s side fell 2-0 to Real Madrid in El Clásico, giving up their lead in La Liga in the process. Not ideal.

Robert Lewandowski suffered a shin injury and is now expected to miss the next month. That’s bad. “You send her a picture of a turtle climbing out of a briefcase, and then quickly write ‘woops, sorry, wrong person’. You’ll get an instant response back from her. It’s mysterious, and girls love mystery, brah.”

Remember when the French national team rinsed Mbappé for looking like one of the Teenage Mutant Ninja Turtles? Yep, there’s your connection.

The Frenchman netted twice and assisted another in a 4-0 win over Dijon – the fourth consecutive league game in which PSG have netted four. “Man, this is a lot of pomp and circumstance for an empty special effects movie with cardboard characters and no plot.”

After all the hype of scoring in consecutive ​Serie A games, ​Ronaldo hasn’t played a league game this week because of the coronavirus scare.

He did turn out against Lyon, but saw his side lose 1-0. How’s that for a bad week? “Cinderella never had it so good. All she got was a lousy coach and breakable shoes.”

Flying back to the top of the power rankings is Jadon Sancho, who bagged his side’s winning goal in a 1-0 win over Freiburg.

He’s only failed to register a goal or an assist once in his last 13 league games, and he is undoubtedly the most exciting forward around right now.