Cristiano Ronaldo has described the 2016 European Championships as the ‘most important’ trophy of his career​ – revealing that he got drunk on champagne in the post-match celebrations.

The five-time Ballon d’Or winner has won almost every trophy available to him as a player, counting five Champions League titles, four Club World Cups, three Premier Leagues, two La Liga crowns and one Serie A in his personal haul.

However, at international level. Ronaldo has only lifted one trophy in 117 appearances – the 2016 Euros. It is Ronaldo’s biggest honour to date, he claims. 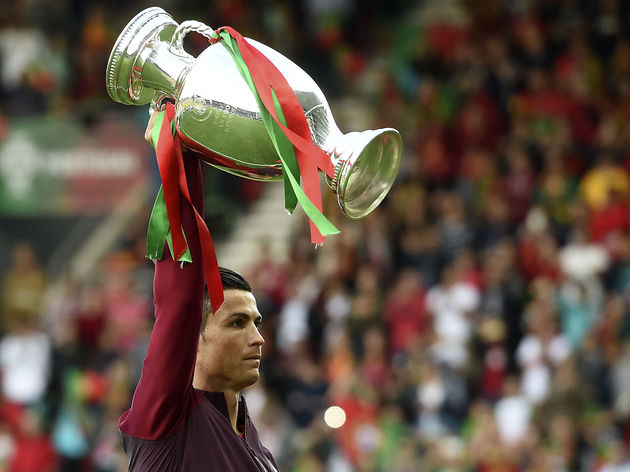 “It was the most important trophy of my career,” ​Ronaldo said in an interview on DAZN Italy, before revealing how he ended up getting drunk despite being tea-total.

“It was an incredible, unforgettable evening: I cried, I laughed, I suffered, I shouted, I got drunk.

“During that game [the final against France], I cried so much that I was dehydrated. At the end of the game, during the celebrations, I drank a glass of champagne and immediately it went to my bead. I never drink but that day was so special.”

Ronaldo scored three times en route to the final in Paris but famously came off injured and had to watch from the sidelines as Eder became the unlikely hero in a 1-0 win over hosts France. Ronaldo will have a chance to match his greatest achievement in the summer of 2020. Portugal enter the Euros as holders and one of the early favourites, boasting an exciting young squad – including Bernardo Silva, Bruno Fernandes, Ruben Dias and Joao Felix – that is arguably much stronger than the one which triumphed in France three-and-a-half years ago.

An injured Ronaldo famously spent the majority of the Euro 2016 final prowling the touchline alongside manager Fernando Santos, with many speculating that the forward would some day become a coach.

However, in the same interview, the 34-year-old ​Juventus superstar claimed that, while he is not ruling out the possibility, it is not something he is currently thinking about. He added: “Right now, I don’t care about becoming a coach, but maybe one day I will be bored and I will feel like it, never say never.

“If I did become a coach, I would be a motivator. The coach must transmit his passions and his talents to the team. For example, I like to have fun, dribble, shoot, score goals. I should pass this on to the team, as a motivator.”