Manager Massimo Allegri was shown the door as a result of his failure to provide a team capable of winning the big European prize, and Maurizio Sarri was hired to take the Old Lady to levels his predecessor couldn’t reach. ​With ​Inter and ​Napoli strengthening considerably during the summer transfer window, ​Juventus knew they had to breathe life into an ageing and unbalanced squad. As the new manager brings his own ‘Sarri-ball’ style and system to the Allianz stadium, Juventini are excited about the potential campaign ahead.

So here is how the Old Lady might line up next season as they look to clinch their first Champions League title since 1996 and retain the Serie A trophy for the ninth successive year. The Bianconeri number one is certain to retain his spot next season, despite the romantic return of 41-year-old club legend ​Gianluigi Buffon. ​Over the past three seasons,

Last season was the Polish international’s best campaign in his career, and he came up with some vital saves in crucial games, notably in the round of 16 Champions League victory over ​Atletico Madrid. ​Cancelo had a strong debut season at Juventus, but the Juventini will be hoping to see more from their flying full-back under Sarri. Whilst the Portuguese defender showed great attacking threat going forward, his positioning and defensive awareness were occasionally called into question. Despite these worries, he is by far the strongest option Juve have in this area.

Sarri could be the perfect manager to get the best out of this marauding right-back, as the Italian’s style of play focuses on energetic full-backs overloading the wide areas high up the pitch. Cancelo will be hoping to improve his all-round game under his new boss, and his undeniable potential leaves Sarri in possession of the best right-back in the league. 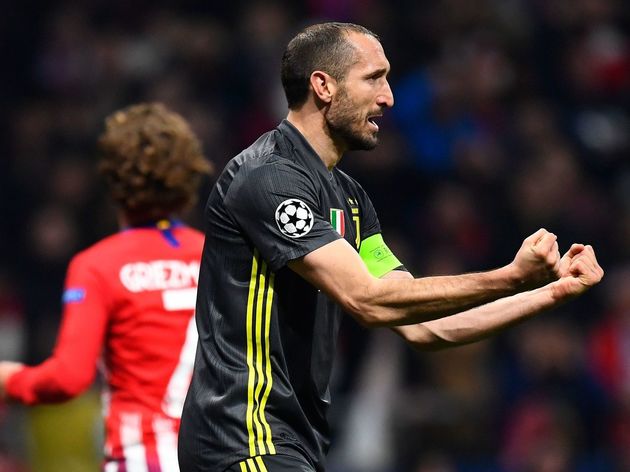 No surprises here. The evergreen brick wall at the heart of the Juventus defence was the only reliability in Juve’s shaky back four in 2018/19, and he’ll play his part in the next campaign too. After the mid-season departure of Medhi Benatia, and Andrea Barzagli finally hanging up his boots, Chiellini will be relied upon once more.

Sarri will have no doubts over the Italian international, who would walk into any elite defence in Europe. Whilst Chiellini’s not known for his ball-playing skills as much as his goal-preventing abilities, the Old Lady might be bringing in the perfect partner to play alongside him… ​The man who knocked Juventus out of the ​Champions League last season may well be on his way to try and win it for them next year. De Ligt is one of the most sought-after players in this summer transfer window, and his destiny seems to lie at the Allianz arena in Turin. With a deal close, the Old Lady will have one of football’s biggest and youngest stars on their books.

The 19-year-old mountain would be the ideal partner for Chiellini, as he possesses bags of pace, has great ability on the ball, and can learn from one of the very best in the art of defending. With Sarri’s dynamic system in place, De Ligt will thrive in ​Serie A, and could be the key to bringing European glory to the Allianz Stadium. ​Sandro did not have his best season last year, and the left-back position remains a cause for concern amongst the Juventini. However, he is a defender who will benefit greatly from the appointment of Sarri.

Sandro struggled under Allegri in a system that focused heavily on defensive capabilities, and a rigid structure to their play. With Sarri in place, the Brazilian will be free to roam the left flank, and his true attributes will really shine through. Roma left back Luca Pellegrini joined Juve over the summer, but Sandro will still get the nod ahead of the young Italian. ​The Bosnian has been a permanent fixture in the base of the Juventus midfield ever since his arrival from Roma in 2016, and this is not likely to change under new boss Sarri. Pjaniabilityplay

allowingfrom those around him, but their two new recruits will provide him with all the help he needs… ​Rabiot arrived as a free signing from PSG, after a fall-out over contract negotiations that lasted the entire first half of 2019. He’ll be looking to get back to his best, and to quickly establish himself as a regular in Sarri’s side. He’ll face stern competition from fellow Frenchman Blaise Matuidi, however.

The athletic midfielder has all the skills and physical attributes to be a dynamic box-to-box player, combining his strength and power with precision and a good range of passing. He will be key to breaking up play in the centre of the park, and re-starting attacks for the Bianconeri. ​​Ramsey waved goodbye to the Arsenal faithful at the final whistle after the Gunners’ home defeat to Brighton, as he set his sights on the fresh challenge awaiting him in Turin. His move to Juve was confirmed months ago, but it shouldn’t be any less exciting for their supporters.

Ramsey will provide the bridge between the midfield and attack, as he’ll look to lay on assists for his forward players, whilst also contributing some goals himself. Sarri will be keen to utilise the Welshman, and try to keep him as fit as possible during the season. ​The Brazilian winger showed flashes of his capabilities over the course of last season, but Juve fans will be hoping for more consistency from the lightning-quick winger this year.

He is another player who will thrive under the tutelage of Sarri, who demands dynamic play and pace from his wide men. Costa will be hoping to put last season’s troubles behind him, which included a lengthy ban for spitting, and to kick on under his new manager. Whilst an attacking midfielder by trade, ​Dybala will have to settle for a role out wide if he is going to nail down a starting position next year. ​With Juan Cuadrado and Federico Bernardeschi also hoping to make this spot their own, Dybala will have to prove himself to his Sarri.

His talent is undeniable. He can open up any team in the world with his eye for a pass and quick feet, and cutting in off the flank is an asset that Sarri took great advantage of whilst manager of Lorenzo Insigne at Napoli. If Dybala can convince Sarri he can replicate that role, we might finally see the best of the diminutive Argentine. If the phrase, ‘last but not least’ was ever applicable, it’s definitely now.

It’s hard to explain why ​Ronaldo will be valuable to Sarri’s side, without patronisingly noting that he’s one of the best players in football history. In the big games, Ronaldo will be key, and he will be hoping to lead his side to Champions League glory, ​with the help of the ten men around him.