Christmas came early for Lazio on Sunday as they upset Juventus in the Italian Super Cup to further loosen the Turin giants’ vice grip on Italian domestic football.

A 3-1 defeat to Simone Inzaghi’s men in ​Serie A earlier this month allowed Inter to seize the initiative in the title race, and it’s the Milan-based side who can boast top spot at Christmas having finished off for the winter break with a 4-0 victory over Genoa. 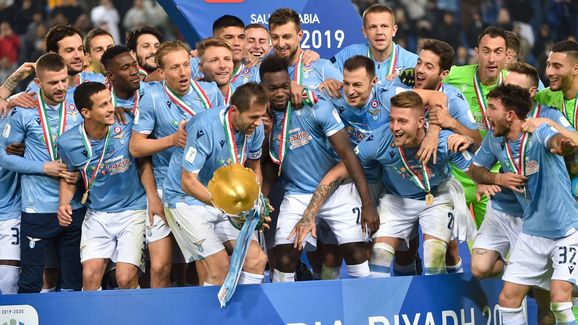 Juve have won their three matches since that setback but welcomed the break for league duty as they prepared to clinch their first trophy of the season in Saudi Arabia, but it was Lazio who had cause for celebration on the full-time whistle.

It finished with the same scoreline as that meeting at Stadio Olimpico on December 7, as goals from Luis Alberto, Senad Lulic and Danilo Cataldi inflicted what will have been a painful defeat for Maurizio Sarri and his men.

The former opened the scoring on 16 minutes, before a period of relentless Juve pressure eventually led to a Paulo Dybala equaliser on the stroke of half-time.

Lazio have been in fine domestic form, however. They have taken 36 points from 16 games so far to put them third in Serie A, and they weren’t lying down.

They retook the lead with 17 minutes remaining of an open-ended second half through Bosnian wing-back Lulic, who volleyed home a Marco Parolo cross, and things would only unravel further from there for the Old Lady. Rodrigo Bentancur picked up a clumsy second yellow in stoppage time, and Cataldi converted the resulting free-kick to ensure it was cup-winner Lazio who lifted their second trophy of 2019.

Neither side is in action now until 2020, with Lazio travelling to Brescia on Sunday January 5, before Juventus host Cagliari a day later.