Maurizio Sarri raised concerns over a possible ‘mental issue’ within his team, after his Juventus players wasted a string of opportunities during Saturday afternoon’s 1-1 draw with newly-promoted Lecce.

The Serie A champions took the lead against their struggling opposition through a Paulo Dybala second-half penalty, but the Bianconeri then surrendered the advantage five minutes later when they conceded a spot-kick themselves. Juve had a whole host of chances to regain the lead and win the match, but the usually-reliable ​Gonzalo Higuain and Federico Bernardeschi both fluffed their lines.

Speaking before Wednesday evening’s fixture against Genoa, Sarri lamented the lack of cutting edge in front of goal, suggesting that Juve

“We have a very low average of shots finding not just the net, but the frame of the goal,” Sarri said, as reported by ​Goal. “In my view, it’s more of a mental issue than anything else. 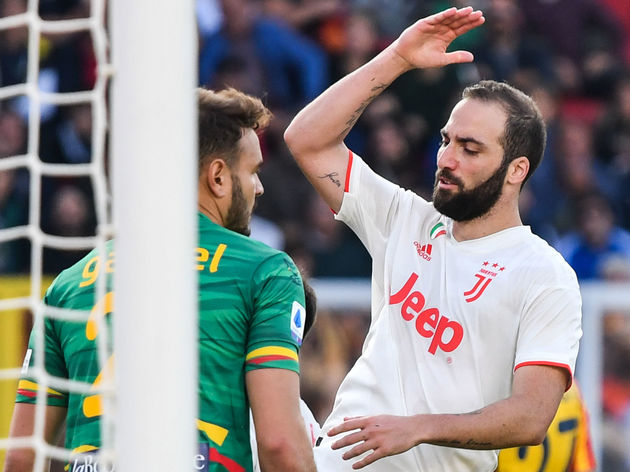 “I expressed my fear with the players about that and we’ll try to prepare some training exercises to help, but we also need to be more determined in front of goal.”

The ex-Chelsea boss was not entirely down-hearted however, crediting his players’ defensive solidity, and he believes his stars are ‘on the right track’.

“We are still the best defence in Serie A,” he said. “This league has changed, the average goals of all the teams has gone up and in general it is a more prolific competition. “Besides, lately we conceded pretty much exclusively from penalties, so we need to keep an eye on those situations.”

“We are adapting to a new style of football, so it’s only natural that it will take a little while to perfect. We can improve a great deal and are on the right track.”

Juventus need to beat Genoa in order to return to the top of the Serie A table after title rivals ​Inter beat Brescia 2-1 on Tuesday.