He also scored them for two different countries (weird).

He scored a lot of club goals and won a bunch of titles (also good).

This is Omar Sivori.

Playing for the team of your home city? Footballer’s dream. Winning the title with them? Something so many absolute stars spend their entire careers dashing themselves time and time again on the rocks of that dream.

Omar Sivori did it within a couple of months of turning 20. Some kinda of ‘academy prospect, couple of sub appearances, get the medal’ thing? Nah, he scored 11 of River Plate’s 53 goals that season as they topped the table as the country’s leading scorers.

Only went and did it again the next season (scored 10 of 61, earned a world record move) too didn’t he?

Wicked, two domestic league title titles wrapped up at the age of 21, let’s go play international football. The club thing’s way too easy, let’s hang out with pals – the famous Angels with Dirty Faces – and play against the best teams on the tournament. That’ll be more of a challenge.

Except Sivori led Argentina to the Copa America (sorry,

Then he moved to Juventus (world record fee, built River a stand at el Monumental) and got barred from playing international football for Argentina. Oops.

He was the league’s 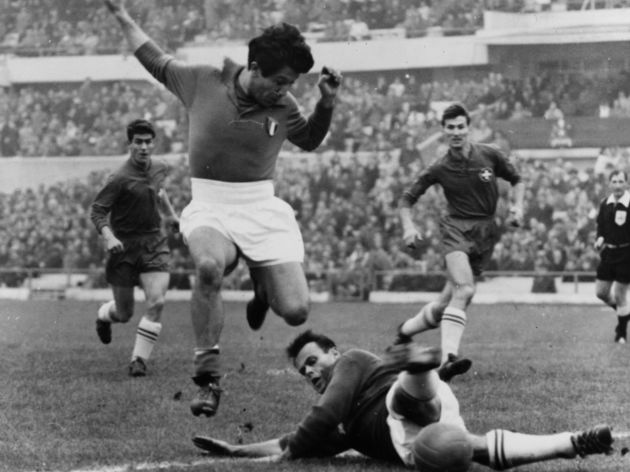 One of those rare ‘double international’ creatures, Sivoli was registered for his new home barely four years after leaving Argentina and being banished from la Albiceleste’s books.

He started his life with gli Azzurri with a goal in a 3-2 win over Northern Ireland, and then another in a 3-2 defeat at the Olimpico against a Jimmy Greaves-inspired England. But it was his third match that mattered. The match against the FA who had thrown him out for having the temerity to go and play on another continent.

In 1961, with that six-goal game against Inter, a domestic record near as damnit to a goal every game and an international record better than that, Sivori came out on top of them all – winning the Ballon d’Or, a handful of votes ahead of Suarez and with more than double the points of any of his competitors. In Europe, that year, he was peerless.