Sometimes the reasons why a club has signed a player are obvious and clear, perhaps because they offer obvious quality, are brought in to add strength in depth, or maybe they just have long-term potential and could flourish in the future.

On other occasions, the logic behind signings is a complete mystery that might never be solved. Djilobodji played just a single League Cup game for the club before joining Werder Bremen on loan in the second half of his debut season. Perhaps even more bizarrely, Sunderland then paid Chelsea £8m, representing a 100% profit for the Blues, to take him off their hands. England one-cap centre-back Steven Caulker joined Liverpool on a half-season loan in January 2016 back when Jurgen Klopp was still a new face on Merseyside. This was a player who had already failed to make an impact on loan at Southampton earlier that season.

Needless to say, he couldn’t break into the starting XI. But, extremely strangely, Caulker ended up coming off the bench to play as a makeshift striker in his only three Premier League appearances for the Reds and wasn’t actually called upon to do any defending. Seemingly on the advice of former assistant manager Carlos Queiroz, Manchester United splashed out close to £8m on Bebe in the summer of 2010, an unheard of Portuguese winger who had joined Vitoria de Guimaraes for free only five weeks earlier.

It promised to be some kind of rags to riches story after the player had spent a portion of his teenage years living in a shelter, but he played only seven times for United during his time at Old Trafford and the club sold him to Benfica, where he also hardly played, for a loss. 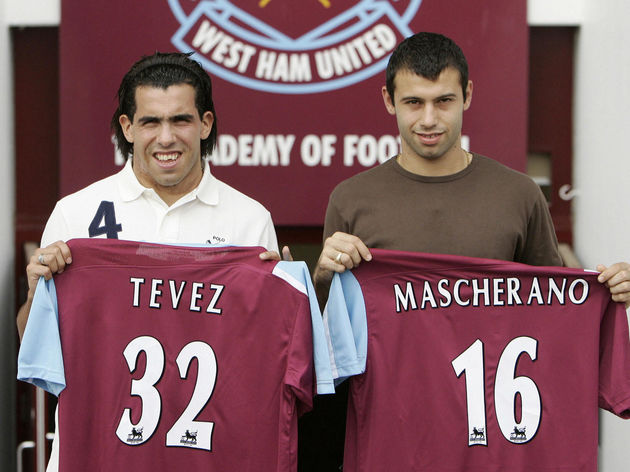 Carlos Tevez and Javier Mascherano were arguably two of the best players in the world based outside Europe in 2006, so more than a few eyebrows were raised when they mysteriously ended up joining West Ham from Brazilian club Corinthians. Fresh off the back of their first Serie A triumph since the Calciopoli scandal stripped them of titles won in 2005 and 2006, Juventus thought Nicklas Bendtner’s eight goals on loan at Sunderland was a good audition and took the Dane to Turin on loan.

It is hard to understand what they were expecting as Bendtner had never previously scored double figures in a top flight league season and that wasn’t about to change. He did miss some time though injury but he still didn’t score in any of the 11 games he actually played in. Barcelona needed a new back-up striker when Munir El Haddadi was sold in January 2019, but Kevin-Prince Boateng was certainly a very mysterious choice after hardly setting the world alight at either of his previous two clubs, Eintracht Frankfurt and Sassuolo.

Notwithstanding the fact he was signed to play second fiddle to Luis Suarez, the former Ghanaian international has been completely left out of Barça’s matchday squad on numerous occasions and hasn’t scored in either of the two La Liga games he has played in. Nothing that French winger Julien Faubert did in a disappointing first 18 months at West Ham should have caught the interest of Real Madrid in January 2009, with Los Blancos then back-to-back to reigning Spanish champions after briefly wrestling domestic dominance from Barcelona.

Faubert’s stint at the Bernabeu is legendary, but all for the wrong reasons. He only played 54 minutes of football for Real and was seemingly caught napping on the bench during one game, although in 2016 he told FourFourTwo he just had his eyes closed because he was bored.

This article was brought to you by Pokemon Detective Pikachu, in cinemas soon. Check out the trailer below: