European football, eh? Who knew it could get this good! ​What, you don’t remember? Well, here’s a quick precis:

– Cristiano Ronaldo DISPOSED of Atletico Madrid (and with them any other preexisting narratives surrounding him, but there’s no time to get into that here, is there?) in GOAT-like fashion

– Manchester City ENDED Schalke as an INSTITUTION (and with it, Domenic Tedesco’s tenure).

– Lionel Messi sent a GOAT signal of his own into the Nou Camp sky.

– Arsenal rose back from the dead like, I don’t know, just spitballing here, T’CHALLA.

So, with that and more to cover, and seeing as we’re on the eve of St Patrick’s Day, we’ve enlisted the help of Martin Scorsese and his, quite frankly, ridiculous filmography. No, Scorsese isn’t Irish. But he does have a film called ‘The Irishman’ coming out this year, so same thing. “You mean, let me understand this cause, ya know maybe it’s me, I’m a little f*cked up maybe, but I’m funny how, I mean funny like I’m a clown, I amuse you? I make you laugh, I’m here to f*ckin’ amuse you? What do you mean funny, funny how? How am I funny?” (Goodfellas)

This is an extract from Zinedine Zidane’s press conference upon his unveiling as the returning Real Madrid manager. Apparently he didn’t take too kindly to all the jokes about his rolled up jeans.

Trigger fingers out and everything. ​“I’m sorry, Honey. I love this thing because you gave it to me. But the truth is…it is one f*ckin’ ugly tie.” (Shutter Island)

Yes, the last time Liverpool visited Porto they may have battered them 5-0. Yes, there’s no guarantee that this won’t happen again. Some might even call it an ugly tie. But, c’mon Porto, don’t be too hard on yourselves!

You beat *checks* Feirense 2-1 at the weekend! They’re a good side, I hear. “All right so he got shot in the foot, what is it a big f*ckin’ deal?” (Goodfellas)

Krzysztof Piatek had his excuses ready and waiting if he didn’t score for two games in a row. He’d even installed Joe Pesci himself to deliver the press release.

But then, in the 57th minute, he scored, and all was forgotten. The goalless streak was over! And he got a wicked cool scar for his efforts, too. Very…gangsta? “I’ll tell you what, I’m never eating at Benihana again. I don’t care whose birthday it is.” (The Wolf of Wall Street)

That’s right, Chelsea Football Club celebrated their 114th birthday on Sunday with a fairly dour draw against a resolute Wolves side – hence the drop in the rankings. But at least they made up for it five days later, with the five-goal mauling of Dynamo Kiev in Europe’s other competition. “I never yielded! And as you can see, I am not dead!” (Black Panther)

Ok, a quick divergence from Scorsese, because what else could I do? Yes, we’ve used this quote before in these here rankings, but it’s the perfect quote for European second leg comebacks!!

And ​Pierre-Emerick Aubameyang thrust it onto a plate when he put the Black Panther mask on, didn’t he?!? “What’s the matter with you?” (Mean Streets)

Yes, Borussia Dortmund may have returned to winning ways. Yes it was an impressive win at that. But they’re now second in the Bundesliga to the Bayern Munich Retirement Home squad, thanks to those geriatrics netting six times in the win over Wolfsburg. “Yeah, you were always f*ckin’ late, you were late for your own f*ckin’ funeral.” [shoots him] – (Goodfellas)

Atletico weren’t just late for their own funeral. They didn’t show up.

It’s a dramatic fall from grace for Los Rojiblancos, and their defiant squad of fighters suddenly looked old and frail, which was a bit of a theme of those knocked out this week. At least they’ve still got La Liga hopes to hold on, but any further setbacks and those will fade soon as well. “Risk is what keeps us young, isn’t it, darling?” (The Wolf of Wall Street)

This is a quote from these very rankings on the topic of Bayern Munich, just last week:

“They are not the old hokeys they’ve made you think they are in the first part of this season.”

Well, that hasn’t aged well, has it? And, if we take that quote to be true, as well as Robert Lewandowski’s grievances about his side’s lack of risk-taking in both leagues, then it adds up, doesn’t it? Das Reboot here we come. “Frank, how many of these guys have been with you long enough to be disgruntled, huh? Think about it. You don’t pay much, you know. It’s almost a f*ckin’ feudal enterprise.” (The Departed)

Tottenham suffered another setback this week, and yet they’ve risen in the rankings? How can this be? Bayern still won 6-0 at the weekend, didn’t they? Well, that’s precisely the point isn’t it. What does a win like that even mean anymore when the gap between them and Liverpool is so clearly defined.

Besides, Spurs are in the quarters, innit. No, I’m not relating any of this back to the quote, because the quote speaks for itself. “You know, we always called each other good fellas. Like you said to, uh, somebody, ‘You’re gonna like this guy. He’s all right. He’s a good fella. He’s one of us.’ You understand? We were good fellas. Wiseguys.” (Goodfellas)

But, at the end of the day, they’re just a great bunch of lads. And that has sway round these parts. “When you kill a king, you don’t stab him in the dark. You kill him where the entire court can watch him die.” (Gangs of New York)

I mean, sure, we could talk about Ajax’s 2-1 victory over a 10-man Zwolle side, but how many people would really care? Besides, in my eyes, that Real Madrid beheading still hasn’t been covered enough.

And they did it in front of the entire world, not just a court room. 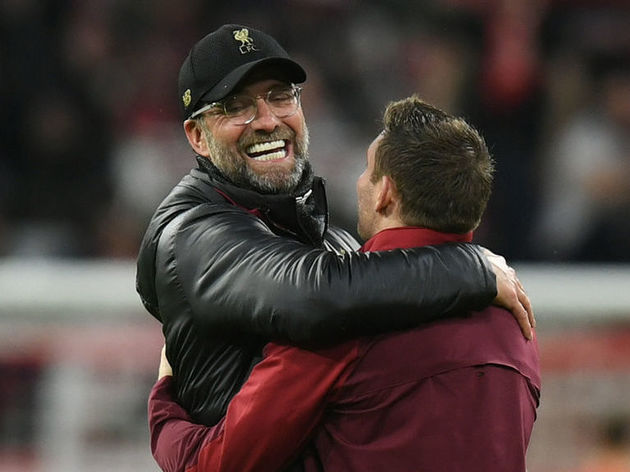 “This right here is the land of opportunity. This is America. This is my home! The show goes on! They’re gonna need to send in the National Guard to take me out, cos I ain’t going nowhere!” (The Wolf of Wall Street)

Jurgen Klopp is celebrating, and I’m not surprised. ​Liverpool have finally done it! They’ve risen in 90min’s Definitive European Power Rankings. And, apparently, they have visions of staying here.

Well, we’ll see about that, but for now, congratulations are in order. Oh, and don’t take any notice of that stuff about America at the start. It is in no way a reference to you and your hedge fund wonders merely being a toy for American investors. In no way. “I’m gonna go have a smoke right now. You want a smoke? You don’t smoke, do ya, right? What are ya, one of those fitness freaks, huh? Go f*ck yourself.” (The Departed)

​Cristiano Ronaldo, at the age of 34, is a fitness freak like we’ve never seen before. And it’s remarkable and annoying, at the same time, isn’t it?

In any case, we’d written off the Old Lady last week. But, ironically with a nickname like that and a week where ageing has been a key them, they shrugged off the shackles of time to progress with aplomb. Welcome back to the big time, I Bianconeri. If I can interject, what I think ​Lionel Messi is trying to say here, is that he didn’t appreciate all the GOAT talk on Tuesday night. ​”It’s a funny feeling being taken under the wing of a dragon. It’s warmer than you’d think.” (Gangs of New York)

Funnily enough, you don’t find many gushings of praise in Scorsese films. But, I’ve grown tired of using those to describe Man City anyway.

So here’s a quote for Phil Foden. Look at him, surrounded by all those titans, and that most demanding of dragons on the sidelines. I bet it’s warm.