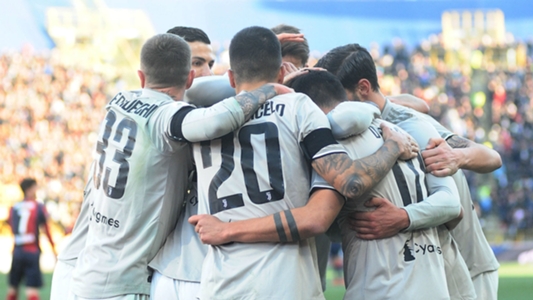 Massimiliano Allegri felt Juventus’ laboured 1-0 win at Bologna was a “crucial” three points gained in their bid to secure an eighth successive Serie A title.

Juve struggled for much of Sunday’s encounter, but Paulo Dybala came off the bench to settle matters, moving Allegri’s side – temporarily at least – 16 points clear of second-place Napoli.

Having suffered a damaging Champions League defeat to Atletico Madrid in midweek, Allegri insisted the importance of the result should not be overlooked, with Juve travelling to Napoli next time out.

“It was only natural there would be a hangover after such an important game as the Champions League one,” the Juve boss told Sky Sport Italia.

“We allowed Bologna very little until the final save that Mattia Perin made to turn it onto the upright.

“This is a crucial result, as it means we’ll go into the game with Napoli at least 13 points clear at the top of the table.

“We’re glad that Napoli are coming up, because that is an important test for us before Atleti.”

Juve have been hit by a spate of injuries and Allegri was forced into fielding a somewhat disjointed line-up, with Joao Cancelo starting on the right wing and Federico Bernardeschi stepping into midfield.

But Allegri is confident that some key players – such as Miralem Pjanic, who appeared as a late substitute despite suffering from illness, and Douglas Costa – will be fit to face Napoli.

“We’re hoping to get some players back, although Douglas Costa is probably the only [injured] one who could recover,” said Allegri.

“Pjanic has been coughing, sneezing and had a temperature for a week now. I actually asked him before he went on today if he could even breathe properly and he said yes.

“[Giorgio] Chiellini had half a game against Frosinone after that calf injury and then played in Madrid. The fitness levels will certainly improve over the next couple of weeks.”