Inter manager Antonio Conte has enjoyed a decade-long career at the top of club and international management, and needless to say, he’s worked with some pretty exceptional talent in that time.

Managing at the highest level does have its drawbacks, though, but only when you’re tasked with narrowing down the cream of Conte’s crop to an all-conquering starting XI. Gianluigi Buffon (GK) – Widely regarded as one of the best goalkeepers to ever play the game, Buffon’s legacy in Italian football is cast in stone. The charismatic ‘keeper formed the final part of Juventus’ formidable defence during Conte’s first season in charge, shipping just 20 goals as La Vecchia Signora went unbeaten – and was a staple member of the title winning sides in the following two years.

Stephan Lichtsteiner (RWB) – Another tried and tested performer for Conte, Swiss star Lichtsteiner excelled in his role as marauding right wing-back. Known for his exceptional work rate and professionalism, his ethos fitted in perfectly under the stewardship of Conte – helping the Old Lady start building their now famed Serie A legacy.

Andrea Barzagli (RCB) – A vital, vital cog in Conte’s Juventus back three, the experience of Barzagli was fundamental to their renewed Serie A success. Strong as an ox, comfortable at seeing out danger and exceptionally calm under pressure, he possessed an all-around defensive game that matched up to some of the best in the world.

Leonardo Bonucci (CB) – The real diamond of Conte’s Juventus defence, Bonucci was at his absolute best when I Bianconeri were in possession. Comfortable with the ball at his feet, he stepped into midfield and his superb reading of the game helped Juventus assume a vice-like grip over every game they played in.

Giorgio Chiellini (LCB) – Leader extraordinaire, Chiellini was, and still is, one of the best defenders in the world. Originally deployed at left-back, he was moved in field to complete the ‘BBC’ defensive trio and flourished at the heart of defence – going on to be named in the 2013 UEFA Team of the Year.

Marcos Alonso (LWB) – What Conte lacked at ​Juventus was a classy left-wing back, able to contribute goals and assists, as well as providing a sound defensive base. At Chelsea, though, he found a more than capable Alonso, who’s natural attacking instincts served him well in a side that enjoyed the majority of possession. Although a little suspect in defence, he offered the Blues so much going forward – owing much of his improvement to the coaching of Conte. Arturo Vidal (RCM) – An integral part of Juventus’ midfield, Vidal was one of club’s first signings when Conte took charge at the Allianz Stadium when he joined on a five-year deal from Bayer Leverkusen. Costing just €10.5m, the industrious Chilean put in a number of dynamic performances and complemented the supremely talented Claudio Marchisio perfectly.

Andrea Pirlo (CM) – One of the greatest midfield distributors of all time, it’s hard to adequately summarise just how good Pirlo was. He seemed to have an eternity whenever he had the ball, and instantly made those who played around him look better. The dictator of all things good about Juventus’ midfield, he was an essential member of Conte’s team.

​Paul Pogba (LCM) – Snapped up on a free transfer from Manchester United, Pogba soon reinvented himself as one of the most gifted footballers of his generation under the guidance of Conte. Given a freedom and licence to push forward, Pogba pushed on and ably supported I Bianconeri’s frequent attacks – as well as being a physically imposing presence in the heart of midfield. 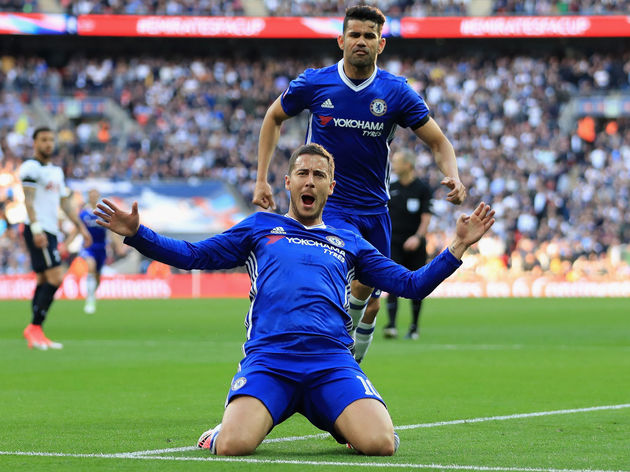 ​Eden Hazard (CF) – With a move to Real Madrid finally completed, it’s time to reflect on a phenomenal career at Chelsea for Hazard. And what a career it was. Some of his finest football in England was played during Conte’s two-year reign, despite widespread reports that the pair didn’t get along. His best ever goalscoring season would suggest he benefitted under his tutelage, resulting in a Premier League title and FA Cup success.

Diego Costa (ST) – They hated each other, but boy did these two get along well in terms of on-field results. In order to oust Carlos Tevez from this lineup, Costa must have done something right – and he did, scoring 20 Premier League goals as Chelsea coasted to the Premier League title in Conte’s inaugural season in charge. He may have left the club soon after, but his contribution to the Blues’ sensational turnaround that season can’t be understated.