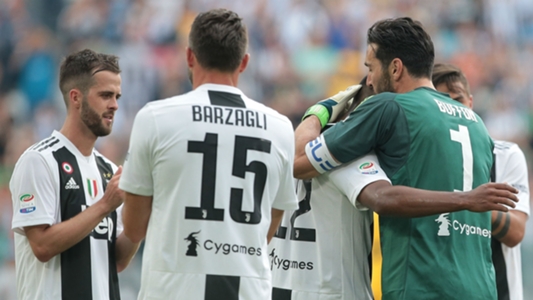 Gianluigi Buffon is one of the “greatest players of all time” and his Juventus team-mate Miralem Pjanic is honoured to have played alongside him.

Italy legend Buffon made his final Bianconeri appearance in the 2-1 win over Verona on Saturday, having announced on Thursday that he would be calling time on his illustrious 17-year stint at the club.

And Pjanic – a key part of Juve’s double-winning season at the heart of Massimiliano Allegri’s midfield – was full of praise for the 40-year-old, who has not yet announced if he will retire altogether and has been offered terms by Paris Saint-Germain.

“Buffon is one of the greatest players of all time,” Pjanic told Mediaset Premium.

“I don’t know yet if he’s leaving football, but he is leaving his Juve.

“We’ll miss him so much, he is a superb person and I am honoured to have played with him.”

And although Alessio Cerci pulled one back for the visitors – with Stephan Lichtsteiner missing a penalty late on – the Serie A champions held firm to cap off the season in winning fashion.

“We closed this important campaign with a victory, this seventh Scudetto was the best, as everyone did something extraordinary,” Pjanic added.

“We are only missing the Champions League and I hope to win it over the next few years. Juventus are certainly building towards that.”