Chelsea have reportedly agreed to release manager Maurizio Sarri from his contract with the club, just a couple of days after winning the Europa League.

Sarri won his first major honour as a manager on Wednesday night, as his Eden Hazard inspired side blew away Premier League rivals Arsenal 4-1 in Baku to seal a second Europa League success in six years.

Despite his success, Sarri has been strongly linked with an exit from Stamford Bridge and Juventus in particular, who parted ways with manager Massimiliano Allegri last week despite sealing an eighth successive Serie A title.

A surprise switch now looks even closer to completion, after Italian journalist ​Alfredo Pedullà revealed on his official Twitter account that agent Fali Ramadani had a “positive” meeting with Chelsea’s hierarchy in London.

The journalist is known to be good friends with Sarri after forging a relationship with him during his time in charge of ​Napoli, so although his latest update is by no means concrete evidence that a deal is forthcoming, it does suggest that rumours of a Juventus switch do have serious substance to them. 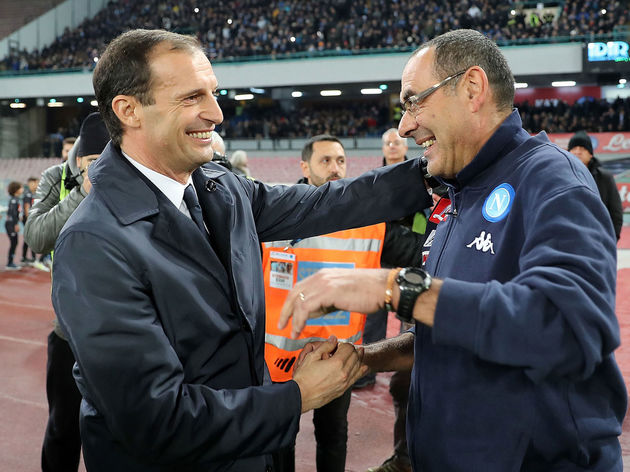 There are conflicting reports, however, regarding whether Chelsea would seek compensation if Sarri were to leave; with the Italian having has two years left on his current £5m-a-year contract. It was initially reported that Chelsea would pursue financial recompense, but GianlucaDiMarzio have since stated that Juventus ‘don’t expect’ any financial obstacles to be presented to them.

Should he choose to go, Sarri will depart England having endured a season of intense criticism for his philosophy of football dubbed ‘Sarri-ball’ – despite delivering a third placed ​Premier League finish, as well as reaching the Carabao Cup final.

His Europa League success, though, will be the defining memory of his Stamford Bridge reign, with many future successes likely at ​Juventus given their utter domination of Italian football in recent years.