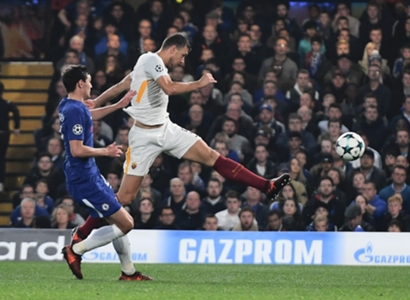 Edin Dzeko’s stunning volley versus Cheslea has been nominated for the UEFA Champions League Goal of the Week, presented by Nissan!

The Roma man’s superb finish arrived during his side’s thrilling 3-3 draw with Chelsea at Stamford Bridge, in a game that also saw David Luiz earn a nod for matchday three’s prize for his flashed curling finish.

Dzeko and Luiz will also have to beat out competition from Juventus midfielder Miralem Pjanic, who once again proved himself one of the best free-kick takers on the continent as he lifted his shot effortlessly over the wall in his side’s 2-1 defeat of Sporting.

Spartak Moscow’s Denis Glushakov is also up for the gong, thanks to a splendidly controlled volley during his side’s 5-1 demolition of Sevilla.

Basel’s Taulant Xhaka rounds out the nominations with a fine run and smart finish that helped secure the Swiss side a comfortable victory at CSKA Moscow.

Click here to watch the contenders and vote for the UEFA Champions League Goal of the Week, presented by Nissan!