He is an old man that played in goal for some of the biggest football teams in Europe since the age of 17 and he has gone 24 years without winning a UEFA Champions League. In the first six years he’d been a boy. But after six years and an UEFA Cup triumph the boy decided that there was no Champions League crown to be won in Emilia-Romagna, and the boy left to join a club that had won two European Cups in 20 years.

In the next 17 years, the boy became a man and then an old man. An old man that was now definitely and finally saolo, which is the worst form of unlucky. Three finals led to three defeats, and I Bianconeri’s furled flags in the Allianz Stadium looked like the flags of permanent defeat.

The year after the old man had shipped off to Paris and suffered in a similar and all too familiar way. The old man was now gaunt with deep wrinkles in the back of his neck. The brown blotches of heartbreak from defeats to ​AC Milan, ​Real Madrid and ​Barcelona were on his cheeks. The blotches ran well down the sides of his face and his hands had deep-creased scars from dealing with consistent UEFA Champions League defeats.

Everything about him was old except his eyes and they were the same colour as the sea and were cheerful and undefeated.

There was still hope in his eyes that the ‘trophy with the big ears’ could be won and the saolo would finally be dissipated.

“Are you strong enough now for a truly big fish?”

“I think so. And there are many tricks.”

He could just drift, he thought, and retire and hang up his boots and gloves after a hugely successful career. But this year marks 24 years without a UEFA Champions League trophy so he opts to try it once again. This year is the best opportunity he has to win the trophy and he knows that.

The 2019/20 ​Juventus are the team he has been waiting for. They have Cristiano Ronaldo and Paulo Dybala and Giorgio Chiellini and could sign a boy, Matthijs de Ligt, to help him carry the weight of expectations.

Buffon knows he now needs this help. More than ever.

He is a tired old man. Tired inside.

There are questions as to whether Buffon can still contribute at the highest level and that, if the opportunity comes to play in another UEFA Champions League final, will his hand cramp and stiffen like rigor mortis and will he see black spots before his eyes and will his back crease and crack as he pulls and yearns for one final triumph.

“Be calm and strong, old man.”

Time is cruel and it is catching up to him.

The blunder against Manchester United last season attests to this.

The old man still has hope that he may finally have some luck. 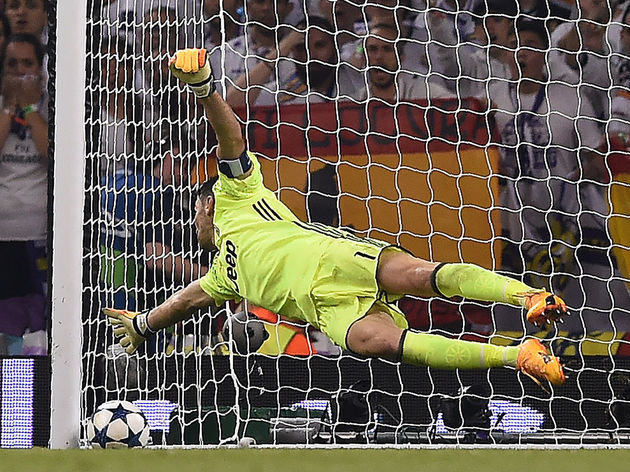 He will pray for luck and when luck comes he will hope to be ready.

Buffon will hope to fight against time and the salao and the wounds and the deep wrinkles in his neck and back and the deep creased scars of defeat and the cramp and the black spots before his eyes.

The old man will hope to fend off tiredness to finally win the UEFA Champions League.

Maybe this is the year.

Every year is a new year.