​Chelsea midfielder Jorginho has warned Maurizio Sarri that Napoli fans could see a potential move to Juventus as a betrayal, as he urged the Chelsea boss to remain in the Premier League.

Sarri is widely expected to leave the Blues and become Juventus’ manager in the near future, and he fuelled the fire by admitting that ​he longed to return to Italy this summer. However, Jorginho, who followed Sarri from ​Napoli to ​Chelsea, warned the manager what to expect from Partenopei fans if he joined ​Juventus when he spoke at a press conference (via the ​Evening Standard) ahead of Italy’s upcoming meeting with Greece.

He said: “It would be sad because I think [Sarri] did a good job. We finished third in the ​Premier League, we won the Europa League and we reached the EFL Cup Final despite all the critics. It was a good first season in Chelsea. It would be sad for everyone.

“The Napoli fans still have him in their hearts; it’s normal that they could get angry. They could treat it as a betrayal; they’re like that. We’ll see what happens.” 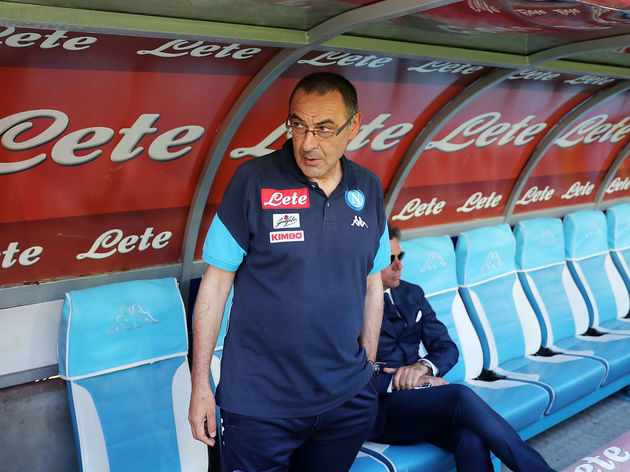 “It’s difficult to talk about that. I think he had – and we had – a good season. It’s not been easy, but he has to stay at Chelsea. Never say never in football, though. We have to keep on doing our job,” Emerson said.

Sarri spent three years with Napoli between 2015 and 2018, but never managed to guide the Partenopei past Juventus in the ​Serie A standings, despite pushing them close on a number of occasions. He was a hugely popular figure at the club, and he retained a large part of that support when he left for Chelsea last summer.

I’d like to thank Maurizio Sarri for his valuable contribution to the Napoli cause. He brought joy and prestige to Naples and Napoli fans all over the world with an entertaining brand of football that drew praise from all quarters. Well done, Maurizio.
Aurelio De Laurentiis #ADL https://t.co/dGE9WNCxFp

In ​Sarri’s latest interview, he insisted that his loyalty to Napoli should not come into question, claiming that the only thing that should matter was his commitment to the club whilst he was there.

However, many fans online have not echoed his feelings, and it remains to be seen how they will respond if his move to Juventus goes through.