For the better part of a decade, Juventus have been famed and admired for their ability to bring in top players on free transfers (loose term). But their policy of cutting out transfer fees has made them greedier.

Wednesday night’s loss at Lyon was a damning indictment of how far the club have fallen in their ill-judged and misguided attempts to win the Champions League. A side seventh in Ligue 1 managed to restrict Italy’s conquering Old Lady to a grand total of zero shots on target. Juve’s squad is now bloated and past their prime years – they have six of the same central midfielder with an average age of 28 – and their attempts to become a more aesthetically pleasing outfit have been worsened by the forward brought in to win them the European Cup, which they are also no closer to winning.

To supplement ​Ronaldo’s arrival (as well as that of Matthijs de Ligt’s a year later), the club have been forced to make metaphorical cutbacks across the pitch in order to fight off Financial Fair Play sanctions.

Immensely popular academy graduate Moise Kean was sold to ​Everton, Joao Cancelo was replaced with the far inferior Danilo, they tried but failed to shift ​Gonzalo Higuain a couple of years after his €90m signing, and much to the fear of their fans (notably Jack Gallagher), they were an image rights complication away from selling their most technically gifted player in ​Paulo Dybala to ​Tottenham. 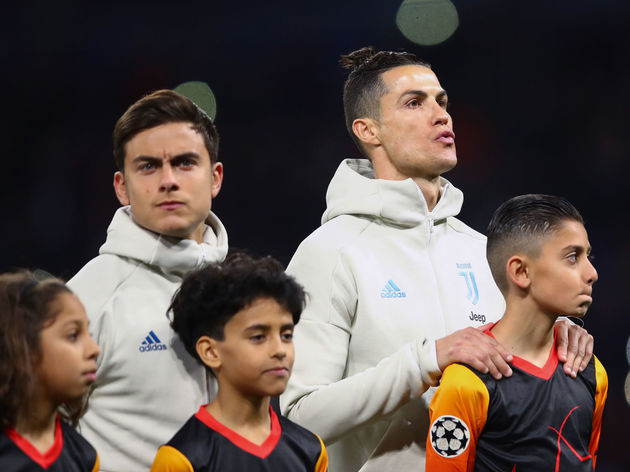 Their crown domestically is starting to slip and this cycle of dominance in ​Serie A is coming to an end – if Juventus do win the title this season, they almost certainly won’t next year.

The cycle within the squad has already met its own end – not performing to maximum capabilities under two managers as talented as Max Allegri and Maurizio Sarri suggests the personnel are the problem more than the coach.

Juventus’ move to become a culture club has had the opposite effect on the pitch, and have been in decline ever since their controversial logo change. They are worse on the eye, they are worse statistically, and soon they will be worse off in the transfer market. Unless they can find a way to shift a squad full of profiles with resale value chipping down by the day, there’s deep trouble ahead. In their current guise, the team isn’t good enough to win the ​Champions League, resting all their hopes on a 35-year-old who has scored a third of his goals from the penalty spot and made the team worse in general.

​Juventus twisted when they should have stuck in 2018, and now look like just another team in desperate need of a hard reset.