Juventus are a club who are both the best supported in Italy while also the most hated. But this has always been the curse of success; admiration and envy.

That jealousy is undoubtedly aimed at the club’s overflowing trophy cabinet (although somewhat lacking in European Cups) but also the plethora of talent to have donned those famous white and black stripes.

So, let’s look back some of those names to have gone down in history with the caveat of one player per nation. After almost two decades with the club, Buffon has come to be synonymous with Juventus. It’s no coincidence that his time in Turin has coincided with the club’s unprecedented domestic dominance. Even during the dark days after the ‘Calciopoli’ scandal, Buffon remained loyal to the club.

As Juve were relegated to the second tier, ​Buffon cemented his legendary status by making what he would describe as ‘a simple choice for me’ and sticking it out in Serie B, in the midst of an exodus of star names.

Still going strong at 42 years of age Buffon doesn’t look like calling time on his illustrious career any time soon. When the man who would come to be known as the ‘Swiss Express’ arrived at Juventus in 2011, the club had recorded back-to-back seventh place finishes. His seven seasons there would bring seven consecutive titles.

Lichtsteiner dominated the right-flank while in black-and-white with his incredible stamina a main feature of his first few seasons. But as his pace started to fade, his role as a leader within the group grew, remaining a vital member of the squad until his departure in 2018. The terrifying figure of Paolo Montero haunted the nightmares of ​Serie A strikers between 1996 and 2005 while he was at Juventus. The Uruguayan was, to put it diplomatically, a competitive player, perennially touch-tight, snapping at the heels of strikers unfortunate enough to have Montero assigned to mark them.

His manager Carlo Ancelotti once described him as ‘from the wrong side of the tracks, but with a code of honour’. Apparently, that ‘code of honour’ permitted seeing the red mist as Montero still holds the record of the most red cards in Serie A history with 16 – for perspective, that’s more dismissals than Patrick Vieira and Roy Keane managed in the Premier League combined. 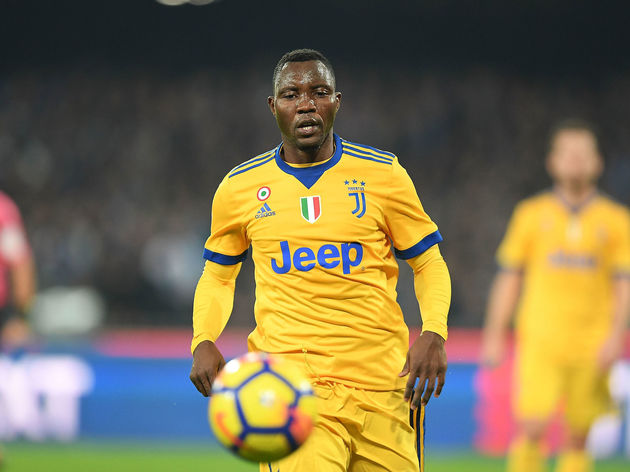 During six seasons with the Old Lady, Asamoah was one of the club’s most reliable players. The Ghanaian international became a particular favourite of Antonio Conte in his last two campaigns with the club as his seemingly endless reserves of energy made him the ultimate left wing-back in the Italian’s favoured three-man defence. A disappointing 18 months at Milan was enough to convince I Rossoneri that Edgar Davids, who missed a lot of action with a broken leg, wasn’t good enough. Juventus saw the error of their rival’s ways and snapped up the Dutchman who had lost to them in the 1996 ​Champions League final.

Davids enjoyed six successful seasons with I Bianconeri, winning three league titles and painfully finishing as Champions League runners-up twice in a row. Marcelo Lippi described the Dutchman as his ‘one-man engine-room’ and it was his partnership with Zinedine Zidane which gave Juve one of the greatest midfields of the era. The Chile international may have won the last eight league titles his three teams have contested in that period, but it was at Juventus where he got his first taste of European silverware.

The Mohican-adorning, tattoo-clad dynamo formed a brilliant midfield alongside Andrea Pirlo, Claudio Marchisio and Paul Pogba between 2012 and 2015 which came so close to ending Juve’s wait for their third European Cup. As the Frenchman became embroiled in the corruption entwined with football bureaucracy, the reputation he was sullying was that of perhaps France’s best ever player.

In his first three seasons with Juventus, he not only won a hat trick of Ballon d’Or trophies, but perhaps more impressively given he was an attacking midfielder rather than a striker, the Frenchman was Serie A’s top scorer three years running.

​Platini was the defining figure of the iconic Juventus team of the 1980s, always lurking around the box in his baggy shirt, waiting for precisely the right moment to dart into the area and snaffle up a chance.

The small, dark-haired and rapid Argentinian winger bewildered defenders in the 1950s and 1960s with a dribbling style wonderfully described as ‘drunk’. But ​Sivori wasn’t limited in front of goal, with 167 in 253 games, he remains one of two players to net six in a single Serie A game.

‘El Cabezon’ (the Big Head – which seems to be an anatomical reference rather than any hint at an ego) also had an edge to his game. Before Montero’s days, it was Sivori who held the record of the most red cards and apparently, he even had to be carried off the pitch by John Charles (see below) to prevent him attacking a referee. Cool-headed and the ultimate professional,

The mythical figure of John Charles, the ‘Gentle Giant’, was more than simply a footballer. He transformed Juventus, who had gone six years without winning the league, before the Welshman came and won three titles in four years.

A true gentleman of the game, Charles never got booked or sent off during his time in Italy and formed one of the greatest attacking frontlines in the club’s history alongside Sivori and Giampiero Boniperti in the late 1950s, which came to be known as ‘The Holy Trinity’.

While his ability in front goal was never in doubt – scoring 108 times in 155 matches – Charles enjoyed a healthy reputation as a great defender. The legend goes that after the Welshman had put Juve 1-0 up, the coach would move him back into defence to see out the win.