Juventus are reportedly plotting a hugely audacious £150m swoop for Liverpool defender Virgil Van Dijk in the summer, as they look to follow up their shock signing of Cristiano Ronaldo with the addition of another superstar.

Van Dijk has firmly embedded himself as the world’s best defender over the past 18 months – and his performances have not gone unnoticed by the rest of Europe. ​The Sun reports that the ballon d’Or nominee ‘may be open’ to a move away from Anfield, should the Reds lift their long-awaited first Premier League title at the end of the season – and Juve fancy their chances at luring the Dutch international to Italy.

And while there is little indication that Van Dijk is unsettled at Anfield and is a key part of arguably the best team in the world, a ‘Juventus source’ claims that ‘the club are actively planning to make a huge bid for him in the summer’.

“After winning a bagful of trophies with Liverpool, Juventus think he may be ready for a new challenge at the end of the season — especially as he’s been playing in the UK for a few years,” this so-called source is quoted as saying.

“And the club are actively planning to make a huge bid for him in the summer.”

Although Van Dijk has shown no signs of wanting to leave Anfield since his arrival in 2018, he did recently admit that ‘we can’t look too far ahead’, regarding his long-term ambitions, and confessed that he wants ‘to fulfil every dream’. “I’m enjoying playing with this team and this manager. We can’t look too far ahead. But right now, I’m enjoying it.”

The Dutch international is a key figure in this ​Liverpool side, which has won an astonishing 24 out of 25 league matches this campaign. His wonderful defensive ability led to the Reds lifting last season’s Champions League trophy, and they have since gone on to win the UEFA Super Cup and Club World Cup.

Van Dijk’s future may be tied to that of boss Jurgen Klopp, who recently signed a new contract with the Reds, keeping him at the club until 2024. In a recent interview with ​Goal, the centre-back admitted that he has ‘a special connection’ with the German coach, who was one of the main factors behind his move to Liverpool. 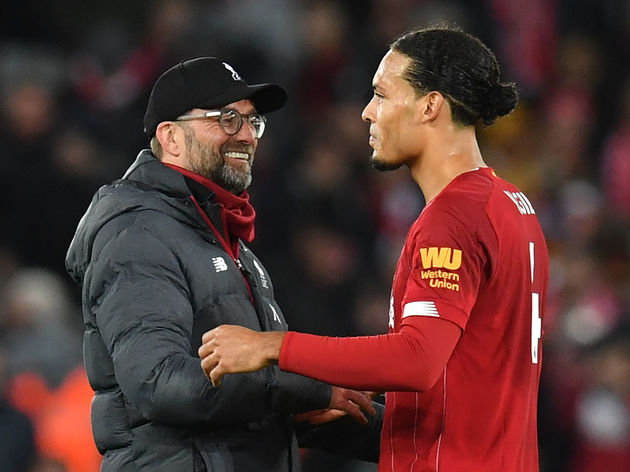 “I definitely have a special connection with him,” Van Dijk said. “And I will always be grateful for him making sure I was going to come here.

“He’s just a fantastic, complete manager with a clear plan. He has fantastic player-management skills. He does it just on instinct, and he always says the right things.”