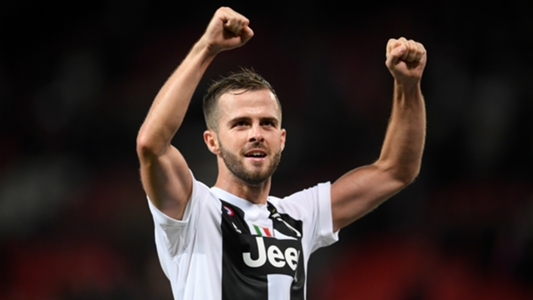 Miralem Pjanic warned Juventus to expect a reaction from “great team” Manchester United when the clubs reconvene in the Champions League on Wednesday.

Paulo Dybala’s first-half goal gave Juve a comfortable 1-0 win over their Group H rivals in a one-sided contest at Old Trafford in October.

The Serie A champions, unbeaten in all competitions this season, will confirm their progression as group winners with another three points in the reverse fixture at the Allianz Stadium.

Bosnia and Herzegovina international Pjanic expects Jose Mourinho’s men to provide firm resistance to that objective and is wary of the danger posed by the likes of ex-Bianconeri star Paul Pogba.

“United is a team of great quality, there are players who can make the difference, so we will have to face them like we did in the first leg.

“I think that we had a very good game at Old Trafford, we could have scored a few more goals. We hope that in Turin we will manage to score more, but we must not forget that Manchester is a great team with a great coach.

“It’s a game between two great clubs, nothing is taken for granted in the Champions League.

“We are part of the group of teams that wants to go deep in the competition to win it, but it’s a long journey.”

Juve enter the midweek encounter following a 3-1 home victory over Cagliari on Saturday that maintained their six-point lead ahead of Napoli and Inter Milan at the top of Serie A.

Pjanic lasted 70 minutes before a slight muscle problem curtailed his involvement, but the 28-year-old is confident he will be fit in time to feature against the Red Devils on Wednesday.

“Everything is okay, I will make sure to be ready for the next game,” he said.

“It’s nothing serious. I certainly have been a bit tired lately, but I didn’t have any pain when I came off and I will be with the team on Wednesday.”