It’s pretty rare that a big decision is made without some kind of warning first – some kind of gentle testing of the waters or some abstract moves which, ​with the benefit of hindsight, fit the picture perfectly.

You see it almost constantly in football. Transfers never come out of nowhere; work has to go into them, and that work leaks out via reports and whispers. By the time the move actually happens, it’s usually fairly easy to look back and join the dots to go ‘oh, yeah, I can see a pretty accurate timeline of how this happened’.

Speaking of which, UEFA are starting to work on the idea that European football seasons won’t be completed.

⚽ A variety of calendar options were presented to UEFA’s member associations today, covering both national team and club competition matches.

They were very clear at the start of April: if leagues don’t play out their seasons, they’re at risk of losing their Champions League/Europa League places. Football. Will. Be. Finished. This can be done. Make it so.

The two and a bit weeks since then have seen some people doing some fag packet maths on the floated idea that leagues could be completed behind closed doors, and it turns out that it’s actually pretty tricky.

​Sports Illustrated’s Stephanie Apstein looked into the idea of the ‘isolated league’ for baseball, where players, coaches, officials(, interpreters, broadcasters, security, cooks…) are all holed up in one location to keep them free of COVID-19. The pitch is: create a compound where everyone stays, nobody in or out, for the months it would take to finish the season.

So…everyone needs testing. Constantly. Food deliveries (and the people who deliver them) need vetting. If someone tests positive, anyone they’ve come into contact with (and anyone they’ve had contact with) has to isolate for 14 days, which probably puts a team out of commission. Probably the whole league.

If everything went perfectly, it could work. There’s no human way it goes perfectly. 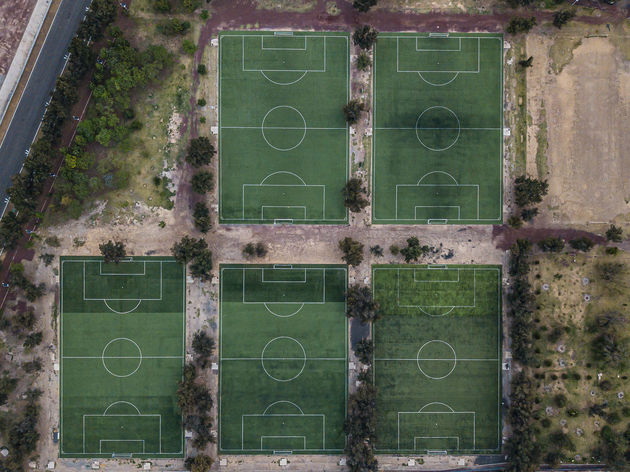 Then you look at ​ESPN’s excellent run-down from last week, going through just how many people need to be in the stadium for a ‘closed doors’ game. It’s not just the 36 players and a couple of coaches, it’s more like 200-300 people.

You need broadcast media (all of these games are going out live, remember!) and camera operators, you need officials, doctors, physios, paramedics, even ball boys and girls – all of whom would have to be tested and isolated before each and every game if they’re going to be handling the same ball as the players.

The point is, even playing football behind closed doors is a maddeningly complex arrangement; even if you can get 500-odd players (plus coaches, catering, etc etc) isolated for long enough to keep them safe. There’s a very good chance this doesn’t happen.

It’s all well and good knowing that in the abstract, but it takes the governing body accepting it for things to move forward. On Monday, UEFA explicitly accepted that some leagues aren’t going to be able to finish. The Eredivisie – a league that produced a Champions League semi-finalist last season – is on the brink of shutting up shop of the season. They’re keeping the door open, but it feels very much like the window is shutting and this is the soft launch of the closure of the 2019/20 season.

“Some special cases,” UEFA say, “will be heard once guidelines concerning participation to European competitions – in case of a cancelled league – have been developed.”

Unless something changes fairly soon, it looks more and more like those guidelines are going to be put into place very widely indeed.