​Massimiliano Allegri bid an emotional farewell in his first press conference since the news broke that he would leave Juventus at the end of the season.

It was revealed on Friday that Allegri would leave the club at the end of the season after he led Juventus to their eighth successive Serie A title, and he took to the podium alongside club chairman Andrea Agnelli in front of a full press room which included both journalists and his Juventus players who all made the effort to attend.

To start the press conference, Agnelli was adamant he would not answer questions regarding their next manager, insisting: “I will not answer any questions about coach 2019/2020. We’re here to celebrate Max Allegri.”

Agnelli then went on to reminisce about his personal highlights over the last five seasons, before also insisting whilst it was a hard decision to let Allegri go only time will tell if it was the right one. He added: “These were five years lived with esteem, affection, sharing, defeats, but above all many victories.

“I have wonderful personal and sporting memories that bind me to him. The great comeback of the 2015/2016, or the duel with the Napoli. Above all, in Massimiliano Allegri I found a friend.

“This has been a decision of a lot of focus and emotions but when we deal with these decisions, we need to make sure it is the best decision for ​Juventus. At the end of several reflections and analysis, we identified that this was the best decision to make.” 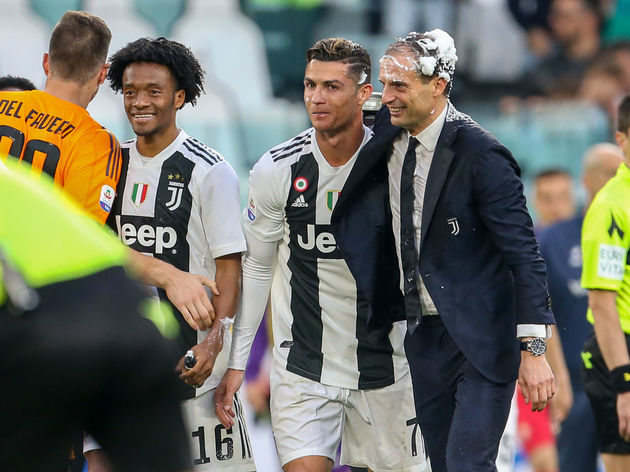 It was then Allegri’s turn to take to the microphone and he began by paying tribute to his players – particularly Andrea Barzagli who will retire at the end of the season – while also admitting it was the right time for him to leave.

He said: “I would like to thank all the players for what they have given me. We now have a winning team that has great potential next year to compete in Italy and in the Champions League.

“We evaluated the future of Juventus and obviously the club decided to take a direction next year without me but that doesn’t change anything. We have grown together and it is the right moment to leave the club in the best possible way. The press conference ended with a standing ovation from the journalists and players in attendance, with Allegri now set to take charge of his final home game for Juventus on Sunday night when they host Atalanta in ​Serie A at the Allianz Stadium.