​Juventus manager Massimiliano Allegri admitted his side were ‘shocked’ by conceding Ajax’s equaliser so soon into the second-half, but was otherwise content with ​the 1-1 draw in the first-leg of their Champions League quarter-final.

Making his first appearance for I Bianconeri since his hat-trick against Atletico Madrid in the round of 16 of the tournament, Cristiano Ronaldo gave the visitors the lead against the run of play with his 125th goal of the competition, on the stroke of half-time. 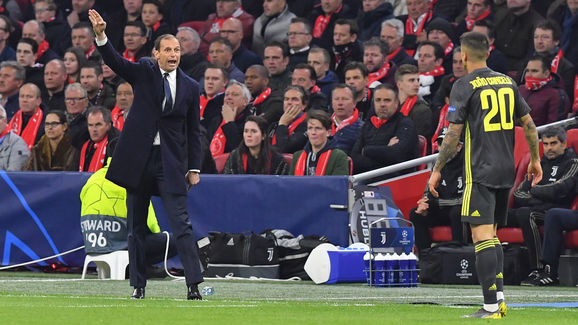 Their lead didn’t last long however, as David Neres equalised for the hosts one minute after the restart, leaving the tie finally poised ahead of the second leg in Turin.

Speaking to ​uefa.com after the game, Allegri conceded that Neres’ goal saw a dip in ​Juventus’ performance levels, but was pleased with how they responded and finished the game.

“We suffered after their goal because we were a bit shocked to concede immediately after the break but we defended well and finished the game better.”

One player praised by the Juve manager after the game was Ajax midfielder and ​Barcelona-bound Frenkie de Jong, with the Italian describing the 21-year-old as the ‘source of their game’.