​Juventus manager Massimiliano Allegri has revealed he is hopeful that Cristiano Ronaldo will make his return from injury for the side’s crucial Champions League tie against Ajax next week.

The 34-year-old suffered a thigh injury whilst on international duty with Portugal in their clash against Serbia last Monday, and appeared to be an early doubt for Juventus’ Champions League quarter-final clash against Ajax. 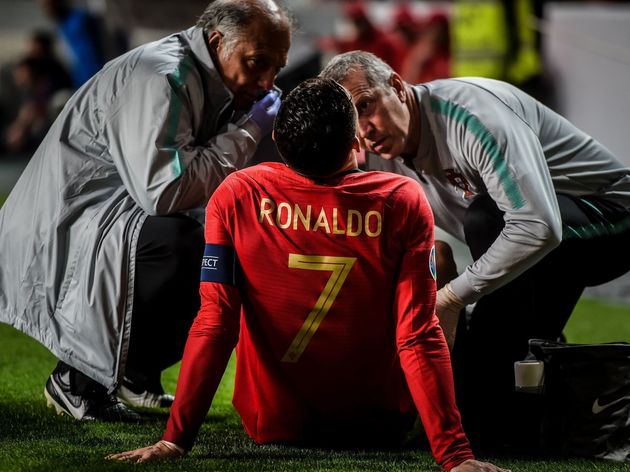 However, speaking ahead of the Bianconeri’s ​Serie A fixture at Cagliari on Tuesday, Allegri provided a more positive update on the Portuguese international’s possible availability.

The ​Juventus boss said (as quoted by the ​club’s official website): “Cristiano Ronaldo is working to get back, we hope to have him ready for Ajax, but it will be difficult.”

With the side still attempting to seal another league title, Allegri also confirmed that the likes of Douglas Costa, Sami Khedira and Juan Cuadrado were all closing in on their own respective first-team returns.

 Allegri: “The team is doing well, right now we’re playing every three days or so. It will be important for players to be able to rest.”#CagliariJuve #ForzaJuve

He added: “​Douglas Costa is in good condition and should be available for that game. Sami Khedira trained yesterday and could be back for Milan. [Juan] Cuadrado is working well and it’s only a matter of time until he’s back with the group.

“I’ll see how ​Paulo Dybala is today, whilst Mario Mandzukic had a bit of a fever so will need to be evaluated. Spinazzola has a problem with his unoperated knee. I believe everything will be fine and he will be available in 15 days.

“Mattia Perin took a blow to the shoulder so won’t be available for Cagliari, but hopefully for Ajax. Andrea Barzagli is back in training.”