De Ligt, whose Netherlands side ultimately lost the final 1-0 thanks to Goncalo Guedes’ second half strike, has been the subject of intense interest from just about every elite club in Europe, following a series of stoic performances throughout the Dutch side’s intoxicating Champions League campaign. 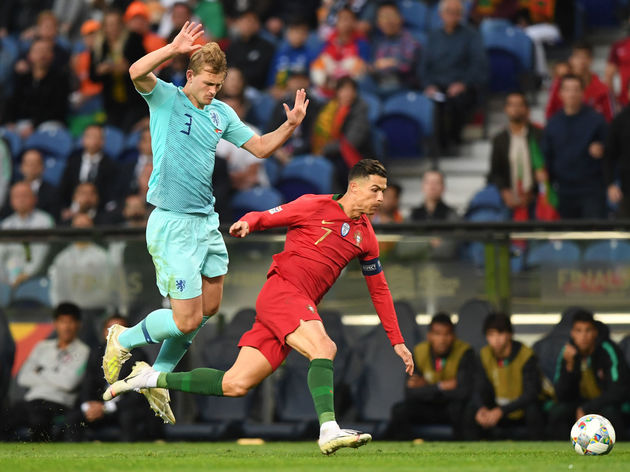 Liverpool, Manchester United, Manchester City, Barcelona, Real Madrid and Paris Saint-Germain have all been doing their best to impress the 19-year-old, but Ronaldo was hoping to steal a march on that group and secure the Dutchman for La Vecchia Signora.

After the final whistle blew, footage emerged of the forward’s embrace with De Ligt, where a few words were seen to be shared before the centre back walked off to the next opponent, laughing.

And, upon later being asked by NOS, as quoted by AS, whether Ronaldo had told him to join ​Juve, De Ligt explained: “That could be true, yes. I didn’t understand him at first. I was a little shocked, so I laughed, but I didn’t say anything.

“Shortly after the game you are not at all concerned with it, you are disappointed you have lost and that is the only thing you are thinking about.”

Spoke to Matthijs de Ligt after the Nations League final. Asked what colours he’ll be wearing next season, he said: “I don’t know. Now I am going on vacation & I just take a rest, relax & then I’ll see. When you rest, you have enough time to think” #MUFC #FCB #PSG #Juventus

Naturally, this was not the first, nor the last question asked of the Ajax man about his future, with journalist Simon Peach later revealing on Twitter that De Ligt had given little away when he asked him about his future plans.