​Happy Easter to one and all!

If you’re not currently in the process of peeling potatoes or preparing all the trimmings for what is surely set to be a monstrous Easter dinner, then why not delve into the football history books for a short while?

As we’ve already seen with these daily dives into football folklore, plenty of iconic moments have taken place on certain days in the calendar, and 12 April is no different.

With a title that reads ‘Ronaldo Makes History’, you’re not to be blamed for pondering which particular record it is he’d broken, simply because he’s broken a tonne of them.

This particular one, however, was him becoming the first player in history to score 100 goals in European competitions. This utterly stupendous feat was achieved in one of football’s most daunting environments too, the Allianz Arena, back in 2017.

Arturo Vidal’s 25th-minute opener had Bayern Munich leading during the first leg of their Champions League quarter-final clash with Real Madrid, but ​Cristiano Ronaldo turned the tie on its head with a second-half brace. The goals brought him up to 97 Champions League strikes, but 100 overall.

​Real would famously go on to lift the trophy that season, but what is most surprising of all, is that those two goals ended an 11-hour personal drought in the competition.

Milan vs Inter Abandoned Due to Crowd Trouble 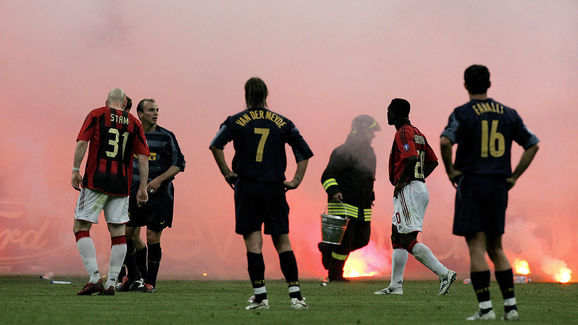 And not just any Milan derby, but a ​Champions League quarter-final second leg in 2005. ​AC Milan had been leading the tie 1-0 from the first leg, and while also leading 1-0 in the second, the game was brought to an abrupt end after 73 minutes.

Coventry, competing in the FA cup semi final for the first time won the match 3-2 and went on to beat Spurs in the final to lift their only FA Cup final in their history. pic.twitter.com/QP7V9r75OP

Yes, believe it or not, that wasn’t actually a thing before 1987.

David Rennie opened the scoring for Leeds only for

Don’t you miss neutral venues for FA Cup semi-finals? I sure do.

Many teams have achieved promotion to the Football League over the years, but when it’s the first time in your club’s history to do so, the feeling is extra special.

Just ask supporters of Yeovil Town, who secured their place in the fourth tier of English football on the day they beat Doncaster Rovers 4-0 in 2003.

That season was their 107th in existence, and while their promotion was already confirmed before kick-off after Chester’s draw in the afternoon, it was nevertheless a special occasion and one that the club and town will cherish forever.

It may have been ​Kevin De Bruyne’s fine curling strike that won them the tie, but there were no doubts over who was the man of the match at the Etihad four years ago. With the tie level at 2-2 from the first leg of ​City’s Champions League quarter-final clash with Paris Saint-Germain, Joe Hart produced a string of fine saves to keep the score at 0-0, with the Belgian midfielder going on to do the business at the other end of the pitch.

​Sergio Aguero had missed a first-half penalty to crank up the nerves on the night, but a sumptuous 76th minute strike from De Bruyne left PSG needing to score twice in order to progress.

It was an engrossing clash, but in the end, it was Manuel Pellegrini’s side who emerged victorious, booking their spot in the semi-finals for the first time in the club’s history.

A narrow defeat to eventual winners Madrid would follow in the next round.

Chasing their first piece of silverware in nine years, ​Arsenal scraped past Wigan in their FA Cup semi-final via a nervy penalty shootout.

Alex Oxlade-Chamberlain had hit the woodwork in the added 30 minutes, Yaya Sanogoals….*cough*, sorry, Yaya Sanogo had two efforts saved, but the sides could not be separated as penalties would decide the tie.

Lukasz Fabianski was the hero for Arsenal, denying

Kylian Mbappé Announces Himself to the World