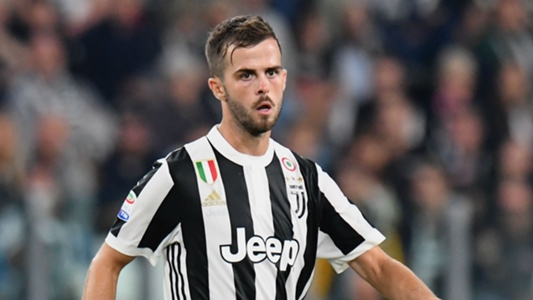 Miralem Pjanic sounded a warning to Juventus’ Serie A title rivals that the best is yet to come from Massimiliano Allegri’s side after they thrashed Torino 4-0.

The champions made it six wins from six in the top flight on Saturday, with Paulo Dybala drilling them ahead against their Turin rivals before Daniele Baselli saw red for the visitors.

Pjanic, who teed up Dybala’s opener, then got in on the act himself with an excellent strike, before setting up Alex Sandro for a third.

Dybala completed the rout late on and Pjanic has no doubt that Juve will continue to build on their hugely impressive start.

“It was a good performance, providing both quality and quantity. Torino usually cause problems for their opponents, but we were never under threat,” he said.

“I’m glad with the team performance and we should continue like this. There’s a lot of quality in this squad and the new arrivals are settling in really well, so we can only improve.

“The season has just begun, so we will continue with this tempo, we’re in good shape, the team is gaining confidence and keeping clean sheets.”

Allegri, meanwhile, was delighted with the display, though believes that his players need to be smarter with some of their decisions.

“The lads had a really good game, including the opening 20 minutes, then once Torino went down to 10 men we controlled the match,” said the Juve coach, whose team face Olympiacos next.

“Even then, we allowed a couple of situations that could’ve been avoided. We slowed the tempo a bit too much after the break, but still created a great deal.

“It wasn’t easy, as this Torino side is tough to beat, but it was the best way to prepare for Wednesday’s Champions League game.

“When we’re in control, we must try to avoid injuries. For example, Paulo Dybala kept the ball for too long in the second half and drew the foul, when he should’ve passed or shot immediately.

“Napoli are playing very good football and getting results, which after all is what really matters. People only remember those who finish first, not second or third when playing well.”

Baselli’s dismissal midway through the first half all but ended any hopes of a Torino comeback and the midfielder took to social media to apologise for his indiscipline.

“I made a mistake. I apologise to my teammates, our fans, to society,” Baselli’s tweet read.