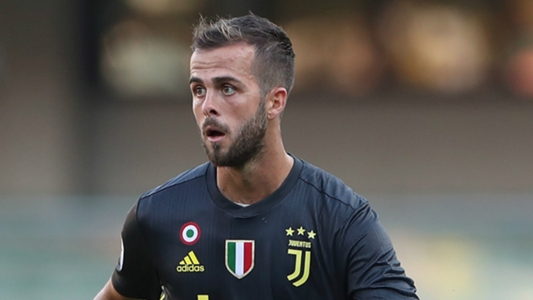 Juventus have confirmed that midfield lynchpin Miralem Pjanic has signed a new deal that will keep the midfielder in Turin until June 2023.

The Bosnia and Herzegovina international had been linked with a move away from the Allianz Stadium but has instead penned a new deal that will keep him with the Serie A champions for another five years.

The 28-year-old joined from rivals Roma in 2016 and is a two-time winner of the Scudetto and the Coppa Italia during his tenure in Turin.

He made 44 appearances last season as Juventus reached the quarter-finals of the Champions League, scoring seven goals.

Having begun his career at Ligue 1 outfit Metz, Pjanic transferred to fellow French top-flight club Lyon where he made featured for them 121 times.

Those performances brought him to the attention of Juve, whom he joined for the fee of €32 million (£29m/$37m), taking the number five shirt.

His impressive performances, both home and abroad, had seen him capture the interest of various European clubs, with Paris Saint-Germain, Manchester City, Barcelona and Chelsea all linked to his signature.

However, his new five-year deal will keep him locked in at Juve for the foreseeable future, as the club pursue an eighth consecutive league title.

In the international arena, Pjanic initially represented Luxembourg at U17 and U19 level, after he spent his childhood there following the outbreak of the Bosnian war.

However, after receiving a Bosnian passport in 2008, he switched allegiances to Bosnia and Herzegovina, for whom he has won 79 caps, ranking fifth on the team’s all-time appearance chart.

He was a member of their squad for the 2014 World Cup in Brazil, their only major tournament to date, and scored in their only win of the competition, a 3-1 victory against Iran.

Juventus kicked off their title defence with a 3-2 win over Chievo and next face Lazio at home on August 25.