The Giallorossi move up to third place in Serie A after dispatching Carpi in resounding fashion with goals from five different scorers, including Miralem Pjanic and Gervinho

Roma made light work of Carpi at the Stadio Olimpico, returning to winning ways in Serie A with a 5-1 victory over the struggling visitors.

Rudi Garcia’s men scored three goals in seven minutes to storm into a three-goal lead by the half-hour mark, with Kostas Manolas, Miralem Pjanic and Gervinho all finding the target.

Carpi pulled one back before the break through former Roma man Marco Borriello, but goals from Mohamed Salah and Lucas Digne saw the hosts gain an unassailable lead.

Both sides had opportunities to net the game’s seventh goal, but Gervinho hit the woodwork before Morgan De Sanctis denied Ryder Matos from the spot in the closing stages, leaving the visitors without a top-flight win this season.

It was Carpi who forged the first chance of the game, but after Borriello danced his way into the box he was denied at the near post by a fingertip save from De Sanctis.

It proved costly for the visitors, who found themselves behind in the 24th minute as Manolas tucked home his first goal for the club following a wayward shot from Digne. 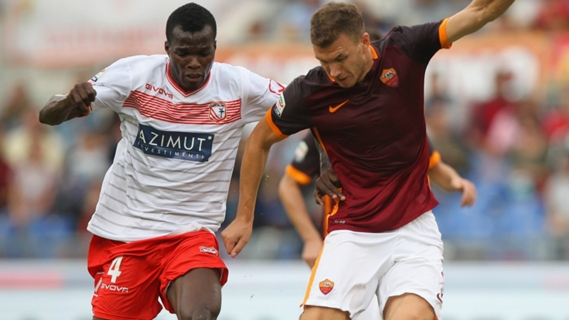 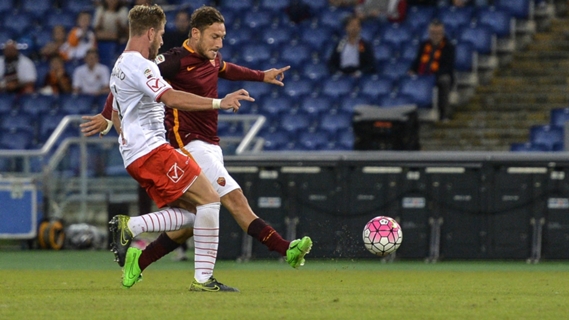 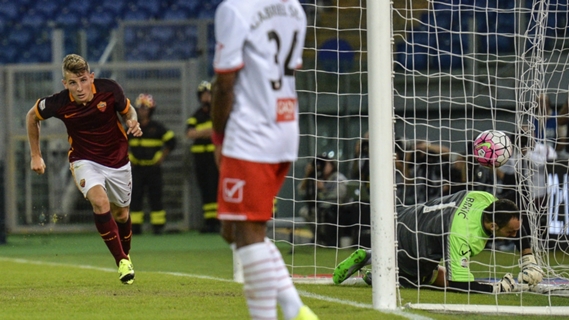 By the 31st minute Garcia’s men had added a further two to their tally.

Pjanic’s wonderfully executed 20-yard free kick dumbfounded Zeljko Brkic before Gervinho volleyed home after the keeper could only parry a shot from Maicon straight to him.

Borriello reduced the deficit ahead of the interval, but six minutes after the restart the hosts restored their three-goal cushion when Salah added the finishing touch after Francesco Totti had been denied by Brkic on the counter-attack.

There could have been a second for Borriello but he fired wide after pouncing on a loose touch from Radja Nainggolan in the box and Digne quickly grabbed Roma’s fifth, opening his account for the club as he headed home at the back post following a cross from Maicon with 68 minutes on the clock.

Only the post stopped Gervinho from extending the hosts’ advantage, but a foul from Maicon gifted Carpi another chance to reduce the deficit with 15 minutes remaining.

However, Matos was denied from the spot by De Sanctis, who showed agility belying his years to get up and keep out the Brazilian’s follow-up effort as well.

Victory sends Roma, temporarily at least, up to third position in the table, while Carpi continue to languish in the relegation zone with just two points from their opening six fixtures.