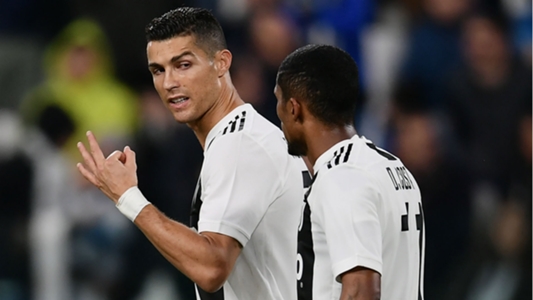 Cristiano Ronaldo and Juventus face a nervous wait to see if a clutch of key stars will be fit enough for the visit of Manchester United in the Champions League on Wednesday.

The Bianconeri host the Red Devils at the Allianz Stadium with Massimiliano Allegri’s side knowing that victory would see them top Group H and secure progression through to the round of 16.

However, they may be forced to tackle Jose Mourinho’s visitors without the trio of Miralem Pjanic, Blaise Matuidi and Douglas Costa if injuries sustained in Serie A action over the weekend prove worse that initially thought.

Juve ran out comfortable 3-1 winners over Cagliari to keep them in prime position in the chase for the Scudetto once again – but their victory was somewhat soured after the trio needed to be replaced.

Costa in particular is a concern after he was substituted at the break after only 45 minutes while Matuidi left the pitch late on clutching his thigh.

Allegri played down concerns on the latter and Pjanic however, confirming that he took the pair off more as precautionary measures ahead of the United game with the expectation that they will be fit to face the Premier League outfit.

“Pjanic was a bit tired,” the manager told Sky Sport Italia post-match. “He had a little muscular problem. Matuidi took a hit but was mostly tired too.”

Regarding Costa, Allegri admitted that the winger’s problems were potentially a little more serious, with the coach confirming that the club would monitor his injury in the build-up to this week’s fixture.

“He felt a pain in his thigh, so we will have to evaluate it over the next few days,” he added.

If Costa is ruled out, it will prove to be a likely blow for Ronaldo. The Brazilian has been one of his best supply lines since he made the move to Juve from Real Madrid in the off-season, helping the Portuguese to seven goals across 13 appearances in all competitions so far.

Juve are looking to reach the final of the Champions League for the second time in three seasons, have lost 4-1 to Madrid at the Millennium Stadium in Cardiff in 2017, with Ronaldo named man of the match for his performance.