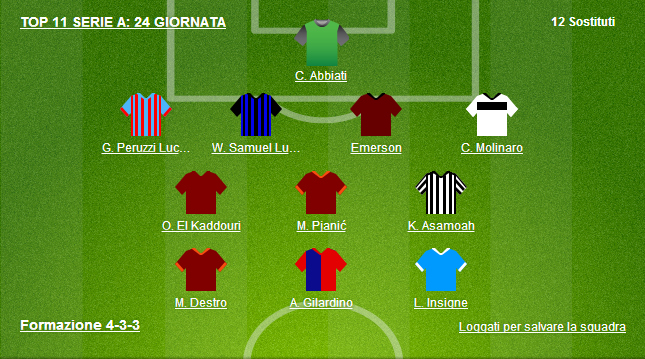 Another round of Serie A action brought another week of star performances all across the peninsula, making more more tough choices in compiling the latest Goal Team of the Week.

The XI is led from the back by Christian Abbiati, who made some decisive saves before Mario Balotelli’s dramatic late winner for Milan against Bologna. Gino Peruzzi secures the right-back slot after his goal-scoring performance in Catania’s victory over Lazio, with Walter Samuel providing another wall-like display as Inter won at Fiorentina. Emerson grabbed the first goal in Livorno’s win at Cagliari, while Cristian Molinaro kicked off Parma’s stunning 4-0 triumph at Atalanta.

Torino were boosted by the display of Omar El Kaddouri as they beat Verona on Monday, while Miralem Pjanic made light work of the loss of Francesco Totti in Roma’s win against Sampdoria. Juventus continued on their merry stroll towards another Scudetto after Kwadwo Asamoah opened the scoring against Chievo.

Lorenzo Insigne was a goalscorer as Napoli won away to Sassuolo, Alberto Gilardino grabbed two late goals to earn Genoa a point against Udinese while Mattia Destro also scored twice to ensure Roma took maximum points from their clash with Sampdoria at the Olimpico.