​It’s that time of year again.

The Champions League final is nearly upon us and the footballing world is reaching fever pitch once more. Liverpool are hoping to add a sixth European title to their illustrious trophy cabinet, whilst opponents Tottenham Hotspur are making their first appearance in the competition’s showpiece event. In today’s world this result would hardly be a shock, or at least not up until the start of the nightmare season Real Madrid have just endured. Almost two decades back, however, this was not the scoreline many predicted, especially after Los Blancos failed to defeat Valencia in their two prior meetings in La Liga that campaign.

The Bats also finished two places higher in the league, but couldn’t produce in the heat of the Stade de France. Fernando Morientes broke the deadlock with a header as half-time loomed, before a quick-fire double from Steve McManaman and Raul ended the contest. Italy was a footballing powerhouse at the turn of the century, with several ​Serie A clubs boasting elite European pedigree. The monstrously-strong pairing of ​Juventus and ​Milan bulldozed their way to the final in 2003, yet couldn’t be separated, with penalties required to decide the destination of the trophy.

The Rossoneri’s Brazilian goalkeeper Dida proved to be the hero as he denied a trio of Juve takers from the spot, setting the stage for Andriy Shevchenko to slot home the clincher and send the club’s supporters into raptures. 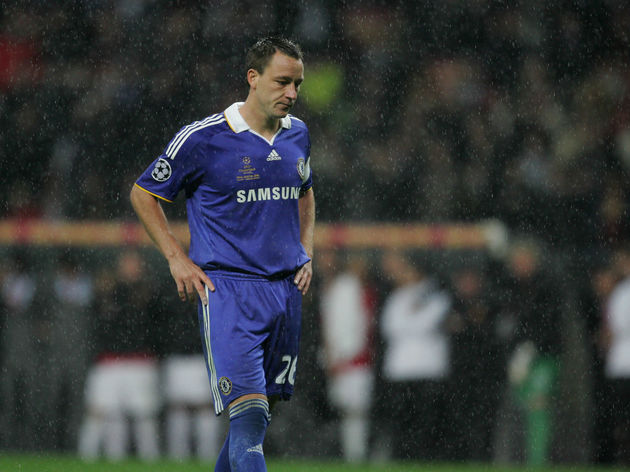 This was like a fairy tale for John Terry, only one that was written by the Brothers Grimm. Time stood still as ​Chelsea’s captain walked up to take the winning kick in the shootout, glory and immortality beckoned, he would be the man to deliver his beloved Blues their first ever Champions Lea- oh, he slipped.

A frighteningly accurate ​Cristiano Ronaldo header had handed ​Manchester United an early lead, only for Frank Lampard to latch onto a fortuitous ricochet and level matters in the dying embers of the first-half. A stalemate ensued, eventually leading to the lottery of penalties where Edwin van der Sar followed up Terry’s miss by making the decisive save from Nicolas Anelka’s timid effort. Arjen Robben has had something of a bittersweet relationship with the ​Bayern Munich fan-base during his time in Bavaria, but he will forever be remembered as the one to sink Jurgen Klopp’s bullish ​Borussia Dortmund team in 2013.

Mario Mandzukic turned home a rather unattractive opener on the hour mark,  though Ilkay Gundogan coolly converted from the spot minutes later to bring his team level. Cue Robben’s crowning moment, the Dutchman scuffing an awkward attempt beyond the helpless Roman Weidenfeller with the clock about to turn red to win the ​Champions League in dramatic fashion. It was Carlo Ancelotti who finally brought the elusive ‘La Decima’ to the Real faithful, though the 4-1 scoreline by no means reflects the true nature of this tense, thrilling encounter. Diego Godin’s ingenious looping header caught Iker Casillas out to hand ​Atletico an advantage which they would hold onto until stoppage time.

Sergio Ramos grabbed the heart-wrenching leveller with a header of his own, sending a pinpoint effort nestling into the bottom corner. Then came a staggering collapse from Diego Simeone’s recruits, as Gareth Bale, Ronaldo and Marcelo heaped misery on their city rivals with a blitz of goals in the final 10-minutes of extra time. Atleti were unable to exact revenge on their foes when the Madrid sides locked horns at the San Siro, two years after that agonising loss in Lisbon. Ramos was once again their tormentor, as Los Blancos’ skipper bundled in following a delicious Toni Kroos delivery.

Replays showed the 33-year-old to be in an offside position, but the goal was allowed to stand. Yannick Carrasco leathered home from point-blank range after Juanfran’s neat squared-ball, before the fullback became the villain of the piece with the only miss of the shootout as Real reaffirmed their dominance in Europe. Who will emerge victorious from this mouth-watering clash and reign supreme? ​Liverpool did the double over ​Spurs in league action this year, but that means almost nothing now. It would take a brave man to call this one.