As Ismaïla Sarr charged onto Troy Deeney’s through ball, leaving Virgil van Dijk running through treacle in his wake, before calmly chipping Alisson to make it 2-0 with an hour on the clock, the elation of the Watford faithful was tempered with a slight sense of unease.

But when Deeney made it three and was joined by his teammates and the ever-willing Harry the Hornet in the corner of Vicarage Road, even the most optimistic Reds knew their run was over. But after 422 days without a league loss, and a record of P44 W39 D5 L0 prior to Watford, how will this Liverpool side react?

​Well, the performances of past unbeaten sides don’t exactly suggest an immediate recovery. This historic Milan side guided by Fabio Capello, who had built on the foundations laid by Arrigo Sacchi, are one of the greatest club teams in modern footballing history.

Their run spanned three seasons, including the entirety of the 1991/92 campaign, but after they lost 1-0 at San Siro to Nevio Scala’s great Parma side, they went on a rather rocky run of form (for them).

Subsequently, they would win only one more game in the rest of the campaign, recording eight draws from ten matches. But, less than a month on from their first loss in almost two years, they fell 3-1 to Juventus yet still claimed their second consecutive Scudetto. ​Bayern Munich’s invincible stretch didn’t cover an entire campaign, but it did coincide with their greatest ever period as they won the treble the year before Pep Guardiola arrived.

In fact, the Spaniard didn’t lose a German domestic game until 5 April, when they had already won the Bundesliga. Despite this dominance, or perhaps because of a sense of complacency, the Bavarians lost their subsequent league fixture at home to Borussia Dortmund. After losing to Manchester United ten games on from their ‘Invincible’ season, an encounter which involved not only the throwing of pizza but ​the sheepish disposal of the redundant ’50 Not Out’ t-shirts, the Gunners would go on to win only one of their next five league games.

This bruising run saw them beaten in the last minute against Liverpool, recording their second loss in four weeks after 18 months undefeated. 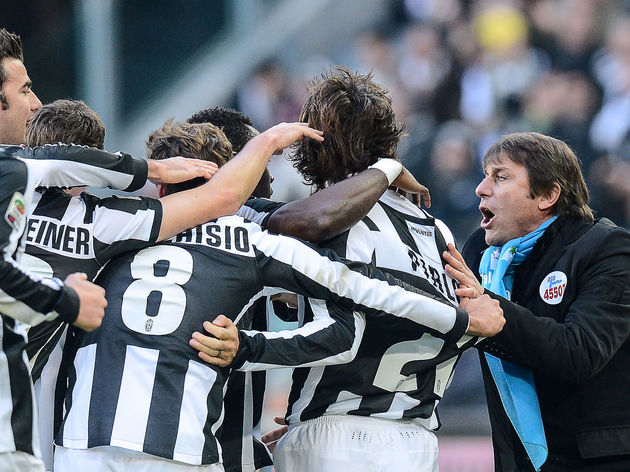 Antonio Conte’s ​Juventus bounced back from their first-ever Serie A defeat at the Allianz Arena, after more than year there, to Inter – the team Conte is now in charge of – with 6-1 win at Pescara.

However, they would draw their next league game before losing again to the other side in Milan 1-0 as they secured their second of eight-straight titles. The much-maligned Ernesto Valverde may be out of work now, but he was two games away from invincibility in 2017/18 when ​Barcelona lost their first match of the campaign in an incredible 5-4 game away to Levante, with the title already sealed.

The Catalans went on to win the Copa del Rey that season and didn’t lose until the sixth matchday of the following campaign, proving to be one of the few teams to shake off the end of their unbeaten run. Brian Clough and Peter Taylor’s ​Nottingham Forest enjoyed their unbeaten run across the second half of the club’s first and only league title. The following season their streak ended after succumbing 2-0 to Liverpool, the reigning European champions.

Four league games later they again tasted defeat, this time to ​Arsenal, and while they may not have won the league that year, it would be the first of two consecutive European Cup triumphs, somewhat easing the end of their invincibility. It seems José Mourinho’s two-time league winners in first spell at Stamford Bridge endured little to no side effects following the end of their run. Chelsea bounced back from their 1-0 loss to Manchester United in Mourinho’s second season with ten consecutive victories and the league title.

This vintage Fiorentina side lost the last game of the 1955-56 season (with the title secured) before losing the third game of the following campaign. That season would see them finish runners-up in the European Cup and league (oddly the first of four consecutive second-place Serie A finishes).

Real Sociedad lost their first game of the 1979/80 ​La Liga campaign on the penultimate week of the season as they relinquished first place to Real Madrid, with victory on the last day not enough to reclaim top spot.

The opening day of the following season also saw La Real lose but they would go on to secure their first title, pipping Los Blancos to the crown on head-to-head.

After somehow going an entire Series A campaign unbeaten and still finishing second, Perugia lost against Torino the following season before losing again to Inter five games later on their way to a mid-table finish in a disappointing follow-up to near glory.